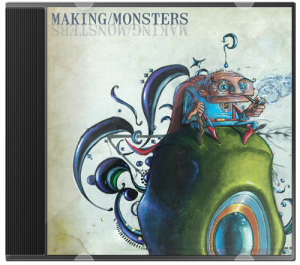 After listening to their debut EP, it’s hard to believe that Making Monsters have only been around since the tail end of 2011. Considering their musical background, forged from bands like No Mean City and Hybris, high production value of this quality should be expected from experienced members of Northern Irish music scene. However, beyond the surface of the clean cut production are a collection of songs that are surprisingly accessible, even for those unfamiliar with the alternative metal scene.

Sink or Swim is the lead single and indeed the highlight of the EP. Heavy infectious guitar riffs and a steady, drum beat lure you into the song before introducing you to the aggressive vocals of lead singer Emma Gallagher. Not lost in the metal mayhem, her lyrics can be heard word for word which is quite refreshing these days from a genre that often sees the singer’s talent lost amidst the music. The lyrics are dirty, venomous and surprisingly catchy, all the while fitting right in with the guitar solos and thunderous drums. if you check out any song from the Making Monsters EP, make it this one.

Guts! and Falling Apart show opposite ends of the alternative rock spectrum that fuels Making Monsters. The former is a fast-paced tune that keeps the momentum of the first track going while getting your blood pumping at the same time. The verses focus heavily on a combination of bass and vocals, before the guitar kicks in making way for the powerhouse of a chorus. The latter is a slower, darker song complete with an eerie guitar introduction and a more melodic vocal range from the singer. Sadly, this track doesn’t quite pack the same punch as the rest of the EP, but could easily make the transition to being one of the band’s best loved live tracks.

The EP is rounded off with The Snake Bites; a loud, angry track that really gives Emma Gallagher a chance to show off her metal and punk influences. From the highest pitch screams to the darkest growl, The Snake Bites is a real Frankenstein’s monster of a song, a mishmash of body parts from the deepest realms of metal and alternative music. Once The Snake Bites, you’ll be hooked.

This debut EP from Making Monsters is an impressive start to the band’s career. Heavy enough for metal fans to raise a fist, yet accessible enough for the weekend rockers to get their mosh on, there is one thing that is for certain: Making Monsters is more than just their band name, it’s their mission statement. Start as you mean to go on boys and girls.