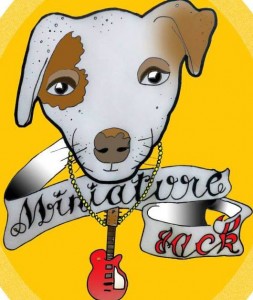 Formed in 2013 and made up of three siblings and two family friends, as described by their bio, Miniature Jack are a band that’s wasting no time in getting their name out there. They have recently released their debut ep and for fans of smart Indie Pop Rock such as Metric and the Yeah Yeah Yeah’s, it’s a must.

Synths, bass grooves, catchy riffs are all present as Miniature Jack tear through the four tracks they’ve made available. ‘Coming For You’ is reminiscent of early 00’s Indie and that is in no way a bad thing. Lead singer Lisa Farrell sings ‘I can feel it coming up, i can feel it coming on’ in a bridge that builds and builds towards the final chorus that’ll be stuck in your head for days. ‘Follow Me’ continues with the hook laden chorus that Miniature Jack seem to have perfected. In a cross between Karen O and Tegan and Sara, this track is sure to be a favourite from their already self described ‘mad’ live shows.

‘Sugar Rush’ has a sound that as a guitar player myself (of sorts, not that good, well… ok, i can play a little) i am searching for. ‘Don’t dare come around here’ is the sentiment that is sung just before it’s backed up by a solo so good that, some of todays metal bands could take notes. With a music video and radio airplay to support it, single ‘Tear It Up’ is a fine example of all the bands influences in one song. As Lisa sings ‘Give me more of this, give me more of this’ it’s something that many a listener will be in agreement to. The four tracks here are consistent and are sure to earn the band quite a few new followers. With this EP, Miniature Jack have arrived in style and are a band that could easily contend with their American counterparts.

March is looking to be a busy month for the band as they have quite a few gigs lined up and radio appearances. If you’re in Dublin at all this month, chances are you’ll have the opportunity to catch them live. And I recommend doing so.