by Una Mackle
in Music Reviews 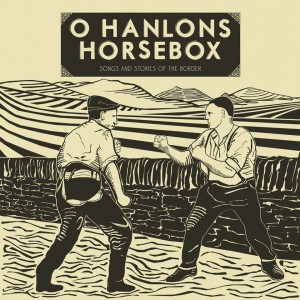 The recently released Songs and Stories From the Border is the debut album from folk/trad/punk crossover band O’Hanlon’s Horsebox. The group, consisting of seven members, describe themselves as “A shower of Hallions from County Armagh” . The band formed in 2011 for a charity night, and consists of Ross McKernan, banjo, whistle and accordion player, guitarist Declan McBride, bassist Conor Langan, guitarist Michael O’ Hanlon, bouzouki and harmonica player Fintan Woods, drummer Ryan Muldoon and mandolin player Sean Lynn. Featuring vocals from all seven members, the album has the feel of a very collaborative effort amongst talented and passionate musicians. Recorded in a series of three sessions over the course of a year and containing 10 original songs, the record is inspired by it’s member’s upbringing in the Armagh border Armagh of Middletown. It has a very honest storytelling lyrical narrative throughout with many songs being inspired by people and stories from the band’s hometown.

O’Hanlon’s Horseboxs’ sound is heavily influenced by their shared love for Irish folk and trad music, yet contains hints of punk, and they cite the Dubliners, Luke Kellys, Tommy Makem, Christy Moore, Damien Dempsey, Dropkick Murphys, Flogging Molly’s and The Clash amongst their influences.

The album opens with ‘Joe Coburn’ a song about Middletown born boxer Coburn who emigrated to America before the Famine and became one of the first World Heavyweight bare knuckle boxing champions. With a very quick tempo and distinctive trad style the song is a great opener, containing a catchy chorus and male harmonising. ‘The fighting boys from Corofin’ is the second tune, and my personal favourite. The singing is led by Ross McKernan who has distinctive, deep and colloquial vocals, and joined by the rest of the band through harmonies. It is a fast paced track with a strong drumming intro, lots of enthusiastic banjo playing, and contains elements of both trad and rock, sounding slightly like Dropkick Murphys. The album changes pace with third song ‘The Ballad of Rachel Corrie’, a song about 23 year old American Peace Activist Rachel Corrie who was shot on the Gaza strip. The slow ballad is sung mainly by Michael O’Hanlon, and joined by harmonies. It could be compared to a Christy Moore or Damien Dempsey song, as it deals with political issues with compassion. O’Hanlon sings it with much heart and makes the listener feel the emotional weight of the subject.

‘We are the People from the Border’ is a funny, trad track in the style of The Dubliner’s with its humour and infectious chorus. With lyrics like; “We drink in the north, we’re on the dole on the south, By God we’re doing the double!” the song evokes much laughter. Fifth song ‘Drink It Up’ has a much more folksy style, with lots of harmonica and banjo prevalent. It deals with the very real reliance of many people on alcohol to forget their daily problems.

Next tune ‘The Brave’ has a sound similar to The Pogues and Flogging Molly’s as it is energising and lively trad with a twist. ‘It’s All Been Worthwhile’, the seventh tune on the album, has a style similar to Damien Dempsey, with a confessional lyrical story arc through the song, melodic singing and harmonised choruses. Penultimate tune ‘Ballyliffin’ has a classical traditional Irish sound to it, with a familiar tuneful chorus that makes any listener who has interest in trad feel as though they are coming home.

Songs and Stories of the Border finishes on track ten, ‘The Sun Will Be Shining Again’, which has an atmospheric intro,melodic mandolin and guitar picking, and a steady tempo throughout. It ties up this lyrical and musical journey on a sweet optimistic note. Throughout the album, the listener gets the feeling that the musicians are thoroughly enjoying themselves performing, while wanting to share stories and experiences and that enthusiasm comes through. Its a very refreshing, infecting thing.