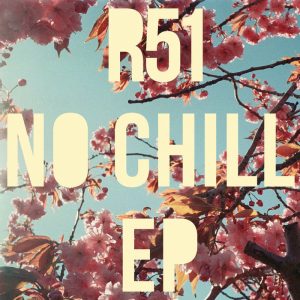 Since the launch of their debut EP ‘Pillow Talk’ in Bar Sub to performances at Reading and Leeds Festival last year R51 have proven themselves a confident, competent and infinitely determined outfit. Blurring chart-worthy pop sensibilities with Shields-style guitar work, R51 are a band that find their own dreamspace, a nu-gaze uniqueness that puts the band in a class of its own.

In ‘No Chill’ we find the six-track sonic equivalent of a tornado. An EP which captures the courage of a band eager to explore and test the limits of their skillful musicianship. The EP begins with ‘Elephant’, a track that flirts between bliss and terror. Melyssa Shannon’s vocals are captivating, almost intimidating, in their strength against the track’s rhythmic and harmonic walls of sound. Multi-tracked vocals attack from all sides, melodic debris in an instrumental hurricane.

“If you don’t care everything’s a little easier”

Riffs crash over one another as Aaron Black and Jonny Woods state their talent as instrumentalists. The reverb-saturated instrumentation itself creates an incredible sense of motion, we’re given the impression ‘Elephant’ is a track that takes a ‘floor it’ approach to its own growth, inflating with each bar until it’s arena-flattening breakdown.

In its Butcher-esque vox and Dazed & Confused lyricism ‘Elephant’ is a full-bodied reimagining of the 90s alternative. Infinitely replayable.

A playful, flanged-out guitar introduces ‘A Perfect Life’. The second track follows up with ceaseless modern alt-rock energy. Cut with endearing, passionate lyricism, we find a hugely spirited confidence in every aspect of the song’s delivery. With the live instrumental providing a showcase of the band’s passion for performance, Matt Killen’s unflinching rhythms keep the energy electrically-charged as guitar and vocal lines career about overhead in a truly airborne listening experience.

Lowered back down, gossamer harmonics introduce ‘Everything’, a heady cocktail of effects-driven riffing through which R51 trace their shoegaze heritage. Engineered by band members Aaron and Jonny, the EP is striking in its production value. R51 are undeniably a band acutely aware of the modern listening experience; we’re given the impression that every effect has been crafted to bring out the best in each song, a true effort to create a soundscape in each track. Crashing-wave cymbals and bathysphere guitar lines takes us on a slow-dive down to R51’s deepest nu-gaze. An acoustic refrain finds its drive in Anton Hughes’ bassline, stylish and confident against both the acoustic guitar and the following full-band climax which draws the song to its close.

In the slow, spiralling ‘Surrender’ old romance is re-imagined, made colorful and lucid again in Melyssa’s impassioned vocal delivery. While the drumlines and the closing, muted water-garden guitar give the track a moveable quality. Mastered by Moosetronix’s Jon Moorehead, ambient swells and pedal effects are given a tremendous amount of clarity, giving body and depth to each track. ‘Morocco’ stays true to R51’s essence: thickly textured, overdriven and cut with a perfect pop hook: “Do it to me like you did before”. A final breakdown underscores the band as well-rounded and effortlessly confident in their alternative rock.

The EP closes with ‘Flesh’, a restrained and tender departure from the heavier version of the song toured during this summer’s festival circuit, the album version recalls a Mazzy Star, ballad-like quality that gives a lasting and endearing quality to the closing track. Delicate and intricate, the song finds harmony between its ebbing acoustic guitar and Melyssa’s vocals. The EP rides out on a final shimmering ambient swell that carries the band and the listener to its close.

Strikingly beautiful in its construction and true to its name, ‘No Chill’ doesn’t hold back as a proud accomplishment of a band that is ever-developing and surely en route to true success. A confident and carefully crafted listening experience, the new EP is sure to make waves.