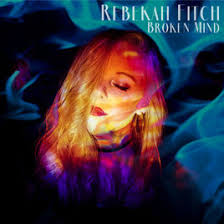 The release of Rebekah Fitch’s newest EP ‘Broken Mind’ further proves that her sustained success is no fluke but a result born of both talent and passion for her craft. A mature and nuanced EP constructed from the varying influences of Pop, Soul, Gospel and Electronic music; Fitch comes across as a seasoned and experienced veteran of her craft, which can only be attributed to the excellent production and Fitch’s dedication to her art. The archetypal pop trio of piano, percussion and acoustics are all prevalent, but rather than overlapping they fit neatly together as if pieces in a jigsaw, which are the perfect accompaniment to the huge impact created by Fitch’s imposing vocals.

Complex opening track ‘A Love So Crazy’ displays the full range and depth of Fitch’s vocal ability. A slow build up leads into a gospel-like vocal crescendo that is comparable to the power and authority of a prime Roger Daltry, with the soothing essence of a Paloma Faith solo. Fitch’s powerful vocals are juxtaposed by the airy and light piano to create layers of sound that wash over each other, creating an illusion of being awash with glorious, victorious pop melodies. An excellent opener that sets the tone for the EP.

Immediately following comes the most impressive track on the EP, modern electro-pop hymn ‘Fake Smiles,’ which sees Fitch further demonstrate her prowess. With a much more electronic influence, the vocals could easily be attributed to the next big EDM anthem. The chorus resembles that of a bass drop, as Fitch’s singing bursts forth from its banks in a climax that the listeners can feel in their stomach. Despite there being a palpable sense of ‘this is gonna be amazing live’ in this song, it retains an air of intelligence and intricacy despite its pop-pedigree, something that is quickly becoming Fitch’s trademark.

Following this comes the return of earlier released sing ‘Not Myself’ (covered some months ago on this website by yours truly) which certainly set the scene for ‘Broken Mind’ with its colossal vocal performance and air of strength. With its grandiose heights and gaunt lows, ‘Not Myself’ brings to mind the talents of such artists such as Stevie Nicks or Sia in its subtle variations and bombastic chorus.

Final track ‘Human Condition(ing)’ sees a distinct change in its make up, resembling a ‘Gorillaz’ track more than a pop one. Once again, the excellent production quality comes into play to create a  6 minute, threatening, psychedelic ballad that put-on full display the depth and variety of Fitch’s talents. A statement ending to an extremely impressive and nuanced EP.