by Matthew Kirk
in Music Reviews 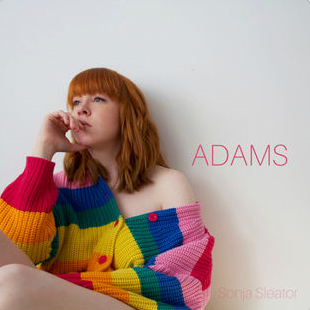 Performances at Holywood Culture Night and across Ireland, as well providing support for local legend Kaz Hawkins at the EastSide Arts Festival, have helped to further establish Sonja Sleator as one of Northern Ireland’s most recognisable singer/songwriters. October 2017, however, presented a particular milestone for Sonja Sleator in the form of her brand new E.P ‘ADAMS’.

Recorded at Millbank Studios in Lisburn alongside producer Michael Mormecha (Mojo Fury), the five-track release builds upon the easy-listening stylings cultivated in her debut E.P. ‘ID’. With the addition of backing instruments to create a more clinical sound, the result is an infectious brand of acoustic pop that’ll shine a warm and fuzzy ray of light to tackle this cold autumn weather. You can find out more about the making of ‘ADAMS’ with Sonja Sleator’s studio diary.

It’s nigh on impossible to listen to this release and not be transported back to the turn of the millennium and hear some of the great female solo song-writing talents of the time. A cross between Dido and Amy MacDonald, ‘ADAMS’ not only sounds so wonderfully put together that it could be mistaken for either of the previously mentioned ladies, but, more importantly, it bears a genuine element of both fun and sincerity via Sleator’s lyricism and tone.

Kicking off with ‘Pour The Vodka’, this down-tempo opener is a tale of lost love and its fallout wrapped up in what is, ultimately, such a charming and relaxing track that’ll leave you pouring a nice alcoholic beverage… perhaps a vodka? Who knows! ‘Calla’ and ‘Mia’ are toe-tappingly infectious, upbeat and offer a perfect early shake-up to proceedings. I have no doubt that both songs will be replaying in your mind long after you finish listening to them.

The final three tracks on ‘ADAMS’ – ‘Mistake On My Part’, ‘Murder’ and ‘Cambria Moon’ – continue the trend of quintessentially acoustic-inspired pop that is, in the simplest terms, just so pleasant to listen to and truly enjoy. Special mention goes to ‘Cambria Moon’ as the stand-out track on a thoroughly enjoyable release that acts not only as a testament to Sonja Sleator’s song-writing prowess, but also, her overall development as an artist. She is certainly one to watch!