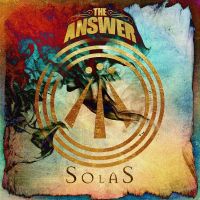 It’s a long time since 2006 and The Answer‘s acclaimed debut album, ‘Rise’. The Co Down hard rockers received plenty of plaudits back then, especially from the specialized Rock press, and were tipped for great things. Has that promise been fulfilled? Yes and no. The band continues to survive in what is a very tough time for Rock music – cause for celebration of itself.  But, you wouldn’t say the lads have ‘cracked it’; even the most ardent fan would have to conclude their last two albums, ‘New Horizon’ and ‘Raise a Little Hell’, seemed to signify a band that was treading water; a band that were able to put together solid-if-not-spectacular albums (apart that is, the song ‘Spectacular’ from ‘New Horizons’, which does live up to its name). Each album would have a few stand out tracks which could be added to an impressive live set, showing that, at its best, The Answer has what it takes. It’s no criticism of the band to say this, after all, acclaimed/successful bands like Foo Fighters aren’t exactly ‘all killer, no filler’, but somehow have manage to get away with it. Them’s the breaks.

So, 10 years on what would The Answer do? More of the same? Play safe? Kept doing what had got them to and sustained them at the level they were at?

No. They haven’t and, this reviewer at least, is surprised and pleased that the band has taken a risk and produced an album which is much more 3-dimensional than it has to date. I say ‘surprised’ only inasmuch as I can imagine how difficult it must be to take risks with a musical career. The shift of direction itself though, should not be a surprise. The Answer was always a band clearly influenced by the greats of Classic Rock and Led Zeppelin in particular. But largely, up to this point, The Answer had shown the ability to match all the blues-infused swagger and bombast of Page, Plant, Jones & Bonham, but perhaps had not shown enough of their subtlety. True Zep fans  know the band wasn’t all about recycling or reinventing blues riffs and having a posturing, preening golden god up front who could scream like a banshee. Every Zep album had light and shade, heavy and fragile, Rock, Blues and also Folk. Led Zeppelin could do the lot and the myriad bands that have tried and failed to follow in those footsteps – quite often made the mistake of trying to copy one part of who Zeppelin were and therefore quickly were found out as being one-dimensional. I think you can echo the spirit of Zeppelin without becoming a copy cat. You can say to yourself ‘what would Zeppelin do?’ without saying ‘how can I rewrite Black Dog?’

Tapping into the spirit of Zeppelin, rather than being a Led Zep copycat is what I think The Answer has done so well on ‘Solas’ and what makes it such a multi-dimensional album, especially in comparison to previous albums. Sure, the title track (‘solas’ is Gaelic for ‘light’) is pure Zeppelin in construction, feel and delivery – an Irish ‘Kashmir’ if you will, but it is a hell of a track. It’s big , bold and magnificent.

But the great thing is that there aren’t another 6 or 7 songs just the same on the album, just as there aren’t a dozen songs like ‘Kashmir’ on ‘Physical Graffiti’. And, in case you misunderstand the Zeppelin reference, there are many songs on ‘Solas’ that would never have been on an LZ album, such as ‘Left Me Standing’, ‘Real Life Dreamers’ (featuring a wonderful cameo by Fiona McBride) and ‘Untrue Colour’. That isn’t the point I was making. No, the point is that between the four lads, they have dropped the bucket deep into their creative wells and have not been afraid to taste from deeper waters – even if it involved playing a bouzouki!

It’s not just the music either that features more layers, so too do Cormac Neeson’s vocals.  Always an absolutely top Rock vocalist, Neeson had that Plant banshee wail and was never afraid to use it (and why would he, when few can do it so well?) But frequently on ‘Solas’, Neeson shows, ironically just as Robert Plant has shown in his latter years, that he is more than just a screamer and wailer. There are wonderfully understated, fragile tones and textures he has laid down on songs like ‘Beautiful World’, ‘Being Begotten’ and ‘Thief of Light’ that we have not heard from him before.

In conclusion, if previously you could expect an Answer album to be 10 x 3-and-a-half minute mid-high paced rockers featuring wailing classic rock screams, ‘Solas’ is a departure. If all you want is those 3-4 minute rockers, you may be disappointed, but this reviewer was not. ‘Solas’ is a triumph for a band really channeling all their experience, maturity, musical ability and confidence. I truly hope this brave move is rewarded by existing fans remaining loyal and the creation of a whole new batch of fans.