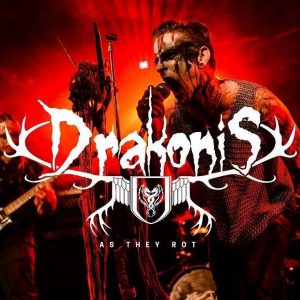 Dark, moody and angry…no, not your average teenager, but Lisburn black/death metallers Drakonis. Starting life several years ago as Order of Shadow, the last few years have seen a slightly altered lineup, a name change and an EP (Ravens Fill the Sky) all cementing their sound. Now, a second EP has been released, entitled As They Rot.

Opening track ‘All Is Still’ starts the EP with a creepy, scratchy intro before blasting into life with some seriously quick double kick drumming and equally impressive sawing riffs. Tending more towards black metal than death, and with lyrics that speak of “rotting corpses” and being “overwhelmed by the stench of death” all couched in vocalist Cass Cassidy’s evil sounding voice – similar to the lower end of Dani Filth’s range – it’s a peach of an opener.

Track two, ‘Abundance of Sin’, sounds broadly similar, and a glorious cacophony of noise it is, too. Blistering and in your face, it gleefully stomps all over your gut while Cassidy scowls about demons, Jesus and sin, with some nifty evil cackling to boot.

It’s closing number ‘As They Rot’ that really demonstrates the breadth of Drakonis’ sound the best. A shudder-inducing fly soundtrack segues into a snarling guitar intro that initially goes at a slower pace than previously heard; that and the vocal effect they employ create one hell of an intense atmosphere. There’s a stronger guitar presence on this one, as well as a few brief moments when drummer Lee McCartney gets to take it relatively easy! The faster faced midsection is exciting and visceral, while the brooding outro wraps everything up nicely.

This brief of what Drakonis are capable of will be music to the ears of black and death metal fans here. The production is excellent, with all members clearly audible, while the songs are coherently structured and engaging; altogether, this is an exemplary effort.