by Alastair Hunter
in Music Reviews 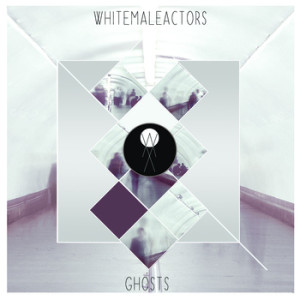 I must admit, I jumped at the opportunity to review White Male Actors as, from the outset and having never listened to the band before, this already gave me plenty of critical ammunition to deride the band in drawing the analogy that there are far too many of them, many of whom are underwhelming, generic, and fall below the radar, doing mostly extras work and television commercials at the height of their success. However, since having actually listened to the group’s debut release, ‘Ghosts EP,’ my mind swiftly changed, and for very good reason.

For those of you who, like me, are new to White Male Actors and their music, they are composed of David McGaughey on guitar and vocals, Pete Devine on guitar, and Mark Donnelly on the drums. Their sound has been branded as ‘ambient pop’, however I feel a more appropriate genre is ‘alternative poetic stadium indie-pop’, as it’s very difficult to pinpoint a constant in their eclectic, ever-growing sound. White Male Actors, in this respect, do extremely well in conforming to this pop ambience, at the same time exploring every possible angle of this vague genre, and so providing a sound for every possible way ‘ambient pop’ could be perceived by those listening to the record.

Pushing the play button, Ghosts EP begins suddenly and strongly, with Take A Bow. Straight off, with the use of obscure and reverberated lead guitar, with a catchy time signature and the rhythm section accentuating this perfectly. A bass driven bridge provides the ambient melody that builds up so well to the explosive, vocal chorus by which this song will be recognised. As a final note, the sections dropping down to just acoustic guitar and vocals adds not just an explosive edge to this song, but adds a sort of signature sound for White Male Actors, one that builds up towards something expected, yet mind blowing every time you hear it.

Next comes the title track of the record, Ghosts. Here, the group explore dark elements in their music. With a simple chord progression powered by melodic lead guitar and syncopated bass, synth, and drum riffs, this provides a perfect, not-too-overpowering, backing track to what is simply poetry with music. The lyrics are what get you in this song; it’s a story, about ghosts. But whose ghosts are they? Are they simply a metaphor? And if so, what do they represent? I’m going to be playing this song all night trying to figure it out.

Things pick up a bit more with the next track, This Is Your Time. A song driven heavily by the simplicity of bass and drums, layered with powerful guitar riffs and, again, a very catchy vocal melody. There is a chord change in the chorus that caught me out, quite embarrassing for me being a massive fan of the alternative side of music. This adds a very ambiguous side to this song, and it’s not hard to see how this band can not just entertain, but guide the attention of any crowd. Easily a great song in many different ways, and fits in well with the rest of the EP.

For the penultimate track, the next song is cleverly named Before The Sun Goes Down. This is an explosive tune with clear input from country, post-rock, and soft-rock genres, along with a changing time signature, awe-inducing vocal harmonies, and heavy use of syncopation, showing us that this band is far from finished with this EP, and that the best may even be yet to come. This song is extremely anthemic, ecstatic, and is the prime example of this band’s capability.

Finally, we come to the fifth and final track of the Ghosts EP. The band’s single, Mysteries And Histories. Starting off with a catchy guitar and piano melody, the element of memorability in riffs has been evidently consistent throughout this EP, and the band’s catharsis of this aspect is epitomised in this song. Some might call this a desperate attempt to be remembered and recognised, I believe it’s simply talented songwriting, as McGaughey and Devine clearly know how to make the best out of a simple, minimalistic guitar melody. Add the one-bar-length bridge organised in it’s dissonance, a chorus you can’t help but sing along to, and very regal, relatable lyrics, White Male Actors have ended their EP with a proverbial bang.

For a debut EP, Ghosts can’t be faulted. More than that, it’s very impressive that White Male Actors can call this their first attempt, having most likely already found their niche in the Northern Ireland music scene with this record. This is a very solid work of ‘ambient pop’ and one which will be recognised as much more than just another release from another band.