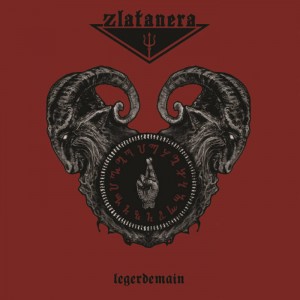 Rising from the ashes of several defunct local bands, tongue twisters Zlatanera formed in 2012 and almost immediately began making a name for themselves with their energetic live shows and groovy, almost bluesy stoner rock. It’s taken them awhile to get their debut album released, but Legerdemain was finally released in late February this year, to the delight of their ever growing legion of fans. With a name that means ‘sleight of hands’ or ‘trickery’, and more than a few song titles that refer to ol’ lord Lucifer himself, it’s certainly an intriguing prospect on paper. What does it actually sound like, though?

Opening track ‘A Bar Too Far’ certainly pins their colours to the mast early on: it’s Sabbath-y vibe and hard rock sensibility give the game away influence-wise, while frontman Andy Campbell’s warm, raspy vocals have a pleasing timbre that will make you smile immediately. The song – indeed, the whole album – is packed with grooves that you feel in your gut, with every instrument downtuned as low as it can go, to great effect.

Next up, ‘Wired’ shows the band’s bluesy side, with a bit of ass shake in amongst the song’s slinky strut. The thunderous bass creates a real sense of malevolence, which leads perfectly into what the band call their ‘trilogy of Satan’ songs at gigs. Starting with ‘Master of Ceremonies’, all doomy and baleful and with an excellent performance from Campbell, it makes way for ‘Bad Case of the Devil’ which is a more mid paced song that sings the praises of ‘the man downstairs’ with a twinkle in its eye, and finally ‘Idle Hand Satanizer’, the title of which tells you everything you need to know about this band, frankly: from its creepy Hammond organ intro to its chugging riffs, it rounds out the trilogy perfectly.

‘Holy Man’s Crook’ follows: with ridiculously catchy riffs and ‘rollicking good time’ vibe, it’s the highlight of an album that has no filler tracks or flat spots. Then it’s all wrapped up with ‘Hooked, Kicked, Hooked Again’, containing the deepest and dirtiest groove on the album – it caresses your ears and kicks your ass at the same time – which segues directly into final track ”Advance of the Clodhopper’, which jogs along at a fairly brisk pace, led by some of the cleverest drumwork on the album. It’s a suitable ending to this catchy and unashamedly enjoyable collection of songs.

With Legerdemain, Zlatanera have added a hefty feather to their cap and further cemented their reputation as a hardworking and talented band. The album is available on their Bandcamp page here; do give it a listen and snap it up. This is a band that is going places.