by Al Gilmore
in News

It is especially pleasing to be able to spread goods news about acts we have tried to champion over the years. Belfast Blues Queen, Kaz Hawkins, is one such act, dating back to her previous incarnation as Mama Kaz, the solo artist. So it is with great pleasure that we can announce that September saw her win not one, but three awards for her music and performances!

‘Blues Matters Magazine’ voted her excellent ‘Get Ready’ album their Writers’ Album of 2015 – beating the likes of Roger Daltry & Wilco Johnson to do so. Given the acclaim that the Daltry/Johnson album received universally, it really is some feat to clinch such an award from a respected publication within her genre.

Not content with that, she received the prestigious Barry Middleton Award for Best Emerging Artist at the 2015 British Blues Awards. It really says something about the talent ‘our’ Kaz has that she can make an impact on organisations across the water, who you would expect to naturally be dominated by artists based in England, if not London. It takes some doing to elbow your way into the consciousness of the movers and shakers of a London-centric music business.

Then to top it all off, last week saw Kaz win the 2015 All-Ireland Best Female Artist at the Pure M Awards, held in Dublin but streamed worldwide on the night. For those of you who don’t know, the Pure M awards were set up to give recognition to the vast depth and array of talent on the island of Ireland. There are 10 award categories and 300 nominees were received across the categories. Kaz herself beat off stiff competition from 9 other female performers to clinch the title of Best Female. Again, you could say it says something for a ‘northern’ act to be recognised by the ‘south’, as we can often be made to feel the poor relation.

On receiving her award Kaz said, ‘I feel immensely proud to be in the privileged position to showcase Northern Ireland’s musical talent to the world and I hope to inspire local song writers and performers to be the best they can be, knowing that their dreams can come true, as mine have’. Actually, Kaz is knocking down doors and blazing trails for all local acts and we at Chordblossom are immensely proud of her for doing so.

Never one to stand still, Kaz hopes to be heading out on tour again soon and has begun a pledge campaign to help fund a tour bus to help her and her Band of Men to get around the country. Your can find the details of the campaign at https://www.indiegogo.com/projects/kaz-hawkins-band-tour-bus-needed/x/10385364#/

Kaz will be performing at U105’s Roadshow at Stormont on Saturday 3 October in support of Northern Ireland Hospice and Children’s Hospice. Join her for her first concert as a triple award-winner and support one of Northern Ireland’s favourite charities! 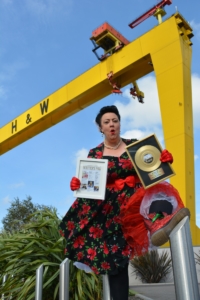