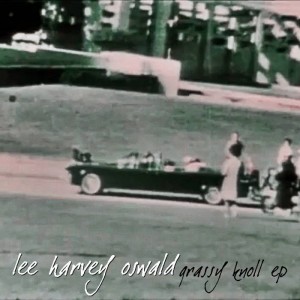 The self-diagnosed up-and-coming hardcore punk band Lee Harvey Oswald aim to kill with the release of their new EP Grassy Knoll, a high-octane festival of distortion that brings to light the insecurities of living as an Irish youth. Each track comes leaden with some heavy riffs, and opener ‘ATM’ is no exception; featuring an enticingly crunchy guitar and swear heavy vocals. Comparisons to the Offspring and Biffy Clyro are easily made, and it’s clear a lot of effort went into crafting a raw punk sound for this first track.

The second track ‘Avoidant’ keeps up the pace up and is sure to excite anyone who enjoys a mosh pit, featuring an aggressive verse juxtaposed with a melodic chorus which isn’t to be snuffed at. Jordan Newell’s eerily atmospheric bassline perfectly accompanies the acute drumming of Jamie Hewitt. The song ends abruptly, giving way to the EP’s final track ‘Medicate’. This swan song is frankly let down by a limp guitar opening and off tone, almost comedic screeching vocals, but its saving grace is an excellent use of rhythmic drums and a riff that really comes into its own as the song evolves. The short comings of this Pink Floyd inspired track shouldn’t detract too much from the overall quality of this diehard EP, but Oswald were certainly a bit off-target here.

Lee Harvey Oswald have proven themselves capable of producing a hard-hitting, hostile and ultimately hardcore punk soundscape, and have great potential to build up more of an identity with subsequent releases. I do, however find it odd how each track ended so suddenly.