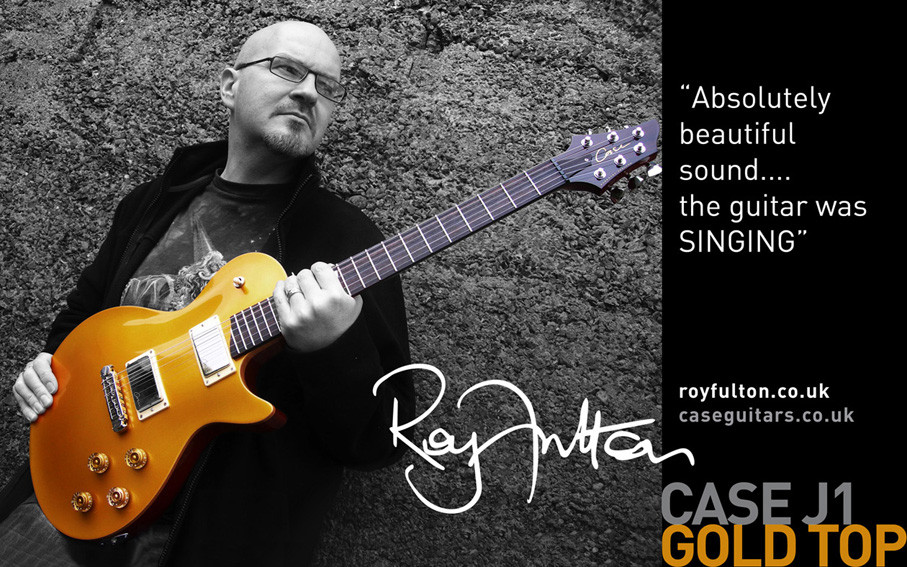 Behind The Job #5 : Session Musician

A Session Musician is a career that is often overlooked in the music industry. If you’ve never heard of it, a session musician is employed to perform on stage or in the studio, but is not a full time member of the group. They are often paid a one off fee for each job. Being a session musician requires you to be versatile in many styles of music and really good at your instrument or voice. Roy Fulton has been a session guitarist for over 30 years and has performed at many high profile concerts and festivals. He has appeared alongside the likes of Whitenake, Bonnie Tyler, Gary Barlow, Jools Holland… the list goes on. He has also appeared in countless magazines and DVD’s as well as music conferences demonstrating music instruments. He is a guitar tutor and has been recommended for lessons by George Lowden of Lowden Guitars. Read on to find out more about Roy’s experience of as a session musician…

► What is your name?

I play guitar for a living. The work varies immensely – studio sessions, live work with bands/artists, teaching guitar, helping to promote various products by playing at trade shows for various companies and helping in the R&D of new products with some companies, making product demo videos etc

► What session work have you done in the past and with who?

Over the years I’ve worked with an extensive list of people, some well known and others not so well known. A list can be found on my website: www.royfulton.co.uk

► Can you tell us about some of your recent jobs/projects?

This year I played at the Music Show in the RDS, Dublin for Fret King, Vintage and Lowden Guitars. The Roy Fulton School of Music based at the Belfast Guitar Centre is always an ongoing concern and I’ve been working with a few local artists as a ‘call in’ guitarist. We’re also putting the final touches to my latest live DVD. It’s my own project, The Roy Fulton Band – Bootlegged Blues 2. My band has recently played some blues festivals, which were fun. I’ve also been featured in some magazine and catalogue advertising for a couple of major guitar companies.

► How did you get into this line of work?

It’s been more a way of life for me. Playing guitar and making music is something I took to at an early age and it’s something that has just happened through time.

►What would a typical day consist of?

There’s no such thing as a typical day. But some of the things that happen quite frequently would be learning new material for upcoming gigs and shows etc. Practicing the guitar and teaching the guitar are the main things I do every day.

It’s 24/7. Someone once said, if you find a job you love doing, you’ll never have to work another day in your life! That’s how I feel about it. I never switch off from it – never.

► What is the most enjoyable part of your job?

That it doesn’t feel like a job in the traditional sense. It’s something I love to do.

► Tell us something annoying about your job?

► Is there anything in particular you are proud of doing?

Not really. I’m not driven by anything, other than the music.

Although I have had the honour of having two different signature guitars made by two different companies so that’s been good. Playing at the London Guitar Show, twice in 2007 and again in 2010. Oh, and opening for Robert Cray. He is blues royalty as far as I’m concerned! lol And also playing to approx 140,000 people. But these things are all icing, whereas the music is the cake, and that’s what it’s really all about.

► Have you any exciting projects lined up for the future?

Yes and they’ll be revealed as and when they happen.

► What kind of characteristics (personality) do you need to do a job like yours?

Good manners, the ability to get on with people and also the ability to adapt, change and fit the role of whatever the paying customer expects of you.

► When would a musician be ready to work as a session musician?

When you have the above.

► Are there any qualifications needed for your job?

No, experience and the ability ‘to deliver’ is all that is required.

► Have you any advice for anyone looking for get into this area?

Keep practicing, keep positive and keep at it. Sooner or later things will fall into place.

► Is there any technology/software used in your job?

There is loads of it, when it comes to the ‘recording side’ but that’s not for me. As long as I turn up on time with a guitar in tune that’s me ready as far as I’m concerned. I leave all that technical stuff to people far smarter than myself.

► Has the job changed at all over the years?

Yes. Getting calls for studio work is nearly a thing of the past. With the advances in technology etc. nearly everyone has the ability to record at home now. The commercial studios have dwindled and aren’t getting the same turnover of clients. And the ones that are still going, tend to operate a ‘dead man’s shoes’ policy. ie they’ll have their own pool of musicians who they’ll always call regardless of how many other session musicians there are out there. I’ve learnt you have to be versatile and that means doing anything where I can make a living whilst playing my guitar.