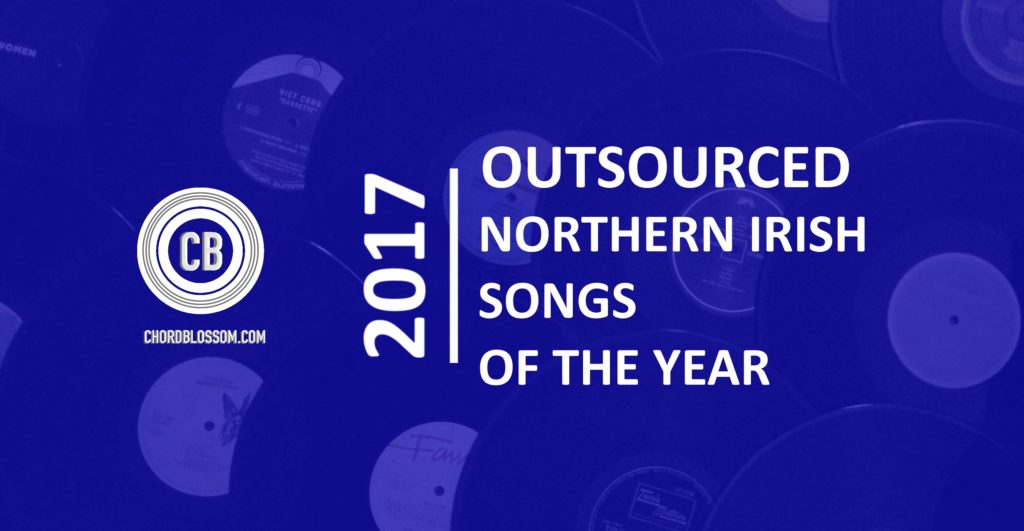 Whether you are a regular or a casual visitor to Chordblossom we hope our passion for local music comes across loud and clear. Thankfully it isn’t just us that are passionate about Northern Irish music, there are a wide variety of promoters, journalists, managers and other industry personnel keen to champion and promote it. As in previous years, we have done some outsourcing, and canvased the views of a wide range of these individual professionals for their favourite songs released in 2017.

Ever since his 2015 collaboration ‘Sea Legs’ with Ciaran Lavery we knew that Ryan Vail was a special talent. He has continued to go from strength to strength with the release of his debut album ‘For Every Silence’ in 2016 which like ‘Sea Legs’ was shortlisted for the Northern Ireland Music Prize.

Ryan performed a series of dramatic AV shows throughout 2017 and we were fortunate to have him perform at Moira Calling where he took the festival by storm and made our All The Little Lights stage live up to its name.

It is for these reasons that our song of the year for 2017 is ’Shadows’ with its pulsating melody and deep vocal showcasing what Ryan does at his best.

Ryan is a musician at the top of his game and we are incredibly excited for his new album and for what he has planned in 2018.

This is not necessarily the best single to have been released by an NI metal band this past year, but it is the one which means the most to me and many local metal fans. When it was released, Shrouded were on the crest of a wave: they were about to fulfill every young metal band’s dream and play the UK’s premier metal festival, Bloodstock.  They had their future before them. Then, at the beginning of October, the band’s driving force, frontman Dani Kansanaho, lost his battle with depression and took his own life. He was just 23.

Anyone who has seen this band live will agree with this entry. Its an absolute banger and litterally takes their live set into orbit(hehe). I had the pleasure of seeing these guys at alot of their 2017 shows and this was the standout song from their live set and their 2017 release “Vampyroteuthis”. There were some cracking tunes from the NI rock bands but this was probably my favourite. Absolute head bangers delight.

The track I’ve kept coming back this year is NULL SET from Arvo Party, from the debut album of former LaFaro bassist, Herb Magee.  It builds in lush, beautiful waves, even has a Shane MacGowan growl in there, and leaves you transported. It’s been my perfect post-club tune and I Iook forward to more in 2018.

Brand New Friend – Hate It When You Have To Go

My favourite Northern Irish track this year is the infectiously catchy pop-rock banger from Brand New Friend, ‘Hate It When You Have To Go’. Every time I listen to this song I can’t help but start tapping my feet or nodding along, before inevitably breaking into a full on boogie as the song picks up pace – no matter where I am! The harmonies from Taylor and Lauren are delightful and the gang vocals near the end are a nice touch too.

The sky seem to be the limit for these guys and they have a great 2018 ahead of them – I can’t wait for their debut album coming out, as well as catching them at their Duke of York show in the new year!

My favourite track of 2017 was Like a Dog by The Emerald Armada.  The guys epitomise Irish alternative folk music and this track reinstates their hold on the Belfast music scene.  It’s one of those songs that you can dance and sing along to when you’re at the pub, but the lyrics also make it very thought provoking.  The harmonies, beautiful guitar work and vocals make it a top tune that I had on repeat throughout the year (among all their other singles).

When it came out, L’etrange was all I listened to for a week. Everything about this tune just sweats cool. It’s a textbook Mosmo track, helped in no small way by Scenery’s Peter Howard. L’etrange gives us this slow start, and builds up around Peter’s extended sax intro. The band follows, adding little touches, until finally Eamonn comes in with Mosmo’s signature rolling bass.

Its only then, when the scene has been fully set, that Gavin steps out of the shade. His lyrics raise the stakes, and the staccato guitar in the main verse keeps ‘em high. It freaks you out, and makes you look twice at that shadow on the way home.

Not all songs earn their name, but L’etrange does.

When I was 14 I discovered the track Red Hill Mining Town on The Joshua Tree album by U2. By discovered it I mean I listened to it on repeat, I read the sleeve notes, I wanted to know who these musicians were, what the artwork meant, I found out who took the photos, I discovered there was a producer, an engineer and a label involved. I listened over and over again – that is when the goosebumps started. In 2017 I discovered Trombone by Strange New Places. I listened over and over again. What did these lyrics mean? Do they know how much I love Belle & Sebastian? Are there more songs? Is there a producer? What do this band look like? Have they any idea how awesome this track is? The goosebumps are alive and well.

For us here at Pop Up the release of 2017 was the double A Side from Franklyn , Friends / Tongue Tied. There’s an early KOL vibe coming from the playful guitar licks and a Kinksesque style about the vocal delivery which we’re not complaining about! Both sides demonstrate Franklyn’s ability to craft records like a boss and we have been spinning them with the volume cranked all the way up. Do yourselves a favour and check them out live, you will not be disappointed!

For us it has to be Hey, I’m Stephen by King Cedar, aka the ridiculously talented Mr Stephen Macartney. Stephen has been a regular performer at Open House Festival over the years, both as a solo act or with top bands like Farriers and The Sea Rats – and audiences love him. It sounds like a cliché, but he really does possess a raw, rare talent. We’ve been listening to this exquisite debut single a lot in the office. A lot! Keep your eye on King Cedar in 2018. It’s his time!

Ryan Vail & Jealous Of The Birds – Love Is A Crow

I was late to the party with Ryan Vail so this track came out of the blue for me. I’ve followed Jealous of The Birds for a while – she blew us away when she played for us back in 2015, and watching her grow in confidence and put out some amazing tracks has been wonderful to see. So when the collaboration with Ryan came out, I was instantly switched on to it. Two very creative, forward-thinking and heartfelt artists working together was only ever going to create something pretty special and they certainly delivered. Love is a Crow became one of my favourite tracks of 2017, and amongst a heart-warming diversity of amazing NI acts to release tracks this year (Sister Ghost, Joshua Burnside, Malojian, Owen Lamont, TOUTS, and New Pagans all being personal favourites for me), this track was the one that I was least expecting. Brilliant track.

There really isn’t a lot to dislike with “Friends”. First and foremost, it’s just a brilliantly well-written pop song; it’s heavy on the hooks and wonderfully sing-able, it ebbs and flows in a satisfyingly organic and understated way, and perhaps most interestingly, it manages to sound both raw and polished at the same time. In short, it really is a beautifully concise snapshot of what Franklyn does best- unabashedly memorable songs with an infectious charm and a raucous edge. My clear winner for best of 2017.

Ryan Bentley – Our Back Yard Festival

A song that for us at least, fits the very definition of an ‘Asda Car Park’ song (please read here for definition). It’s a beautiful, emotional, ukulele-lead song that contains one of the most beautiful, yet tragic, lyrics we’ve heard in a song all year – “I’d rather be nothing than be a burden to you”.

The Crawling – Acid On My Skin

Consolidating on a 2016 that saw them win Metal2TheMasses and appear at Bloodstock Lisburn band The Crawling brought their majestic, menacing, misery and tales of loss to even lower depths with the release of the album ‘The Anatomy of Loss’ garnering critical acclaim. ‘Acid On My Skin’ epitomises a band of metal veterans drawing on all their experience to devastating effect.

Sunflowerfest’s track of the year is ‘Dangerous’ by local girl Amy Montgomery. Starting off at a gentle pace it meanders to a crescendo of a big sounding finale, showcasing Amy’s Joplinesque vocal talents perfectly. The song has a retro feel about it but with a bang up to date production. A new bigger sound from Amy promising lots more to come. All perfect for a sunny afternoon’s listening at a festival.

You can read our own list of the Top Northern Irish Songs Of The Year 2017 here.