As winners of Chordblossom’s Kickstart competition Strabane’s Those Ghosts deservedly earned a slot at Glasgowbury in their debut year as a band. At this early stage of their career the four piece haven’t even reached double figures when it comes to gigs. If the four boys were nervous they sure didn’t show it as they kicked straight into the big choruses of “Set Upon By Dogs”. Their early afternoon bait of punchy riffs reels in the crowd. The G Sessions tent swells in capacity as the set progresses. The song which brought them to the ball “Evelyn” if a prime example of the hook laded tracks which fill their set list. Their performance has extra gusto in the big tent and the band are loving every minute of it. An appearance of the mega-phone signals it’s time for latest single “Explain” as they close their Eagle’s Rock debut with few “Whoa, oh oh oh oh”‘s. PC

It’s not quite underwear but as they edged towards the finale of their set a straw hat is thrown on stage. Frontman Aodhan would have thought it was rude to do anything else but grab it off the floor and finish the song with it on. We like your style lads. 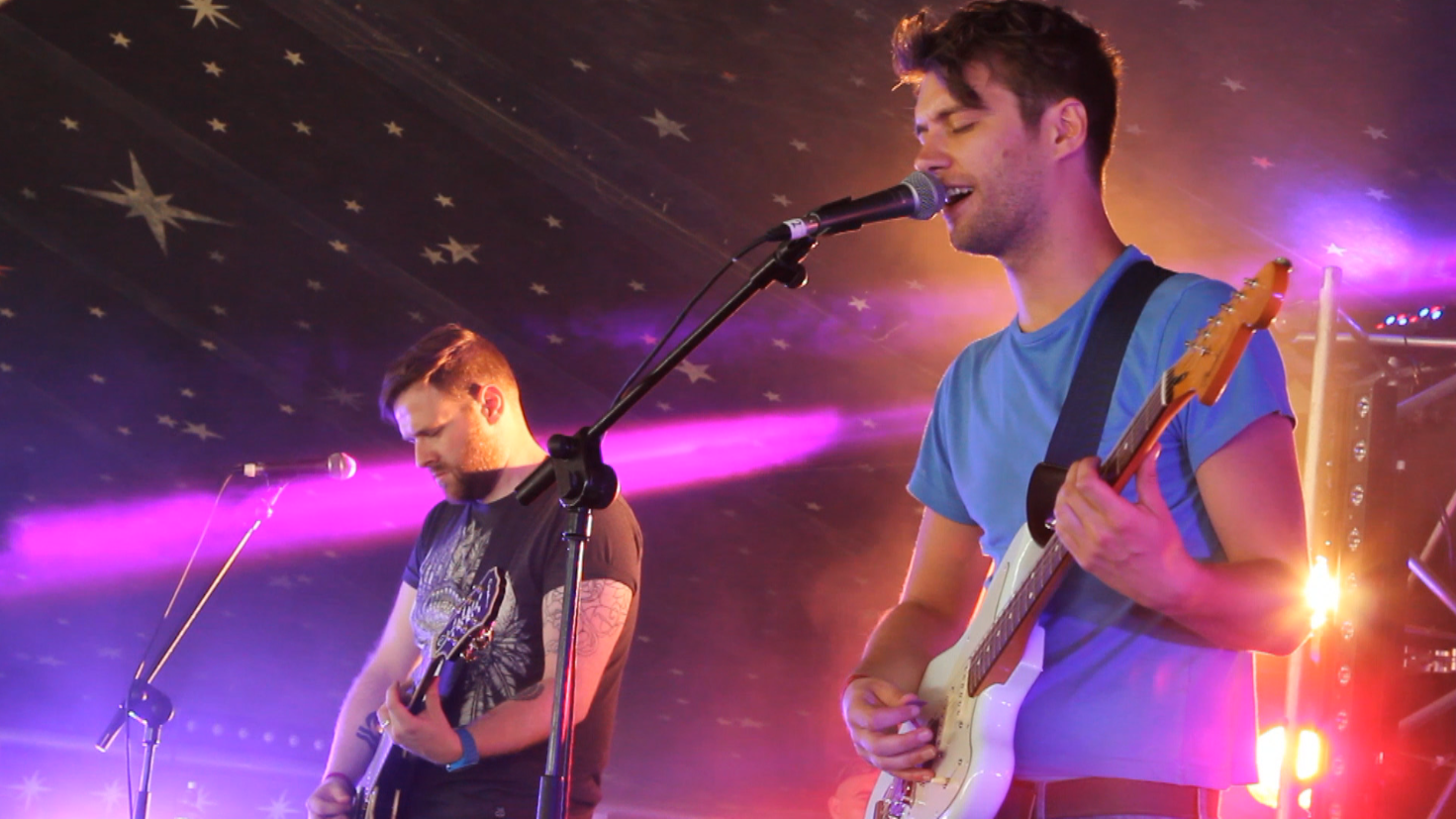 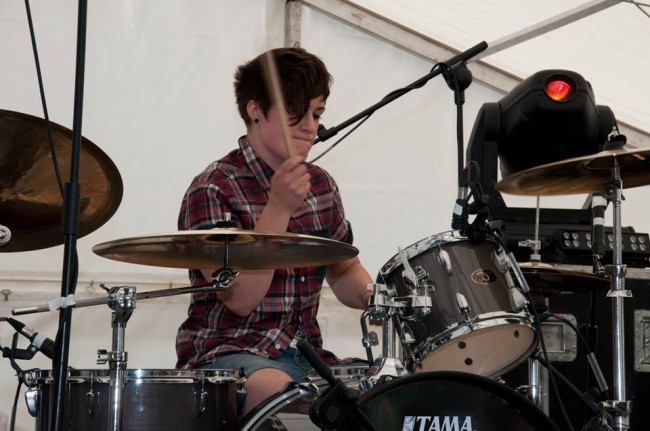 Opening Day 2 of the festival is always going to be a tough task for any artist, but Vanilla Gloom tackle the challenge with aplomb. Playing to a fairly large crowd at the Spurs of Rock stage, the trio put in a fine set of L7/Pixies inspired grunge rock. The Vanilla Gloom members work well together as a unit, with Grace’s technical drumming patterns, Megan’s basslines and the guitar work of Shannon perfectly compliment each other. There are a few drawbacks in their performance – Megan’s vocals get drowned out at several points and the harmony vocals aren’t as strong as they could be, but it’s a largely enjoyable set. CM

‘Lemons and Wine’, one of the best post-punk songs to come from this part of the world for some time.

For a band so young (their lead guitarist is barely older than Glasgowbury itself), Derry upstarts The Clameens put on a matured and assured performance on the Small But Massive Stage. With a straightforward rock sound that calls to mind Kings of Leon, and great songs in their arsenal like ‘She’s Got My Heart’ and ‘#Follow’, the group are a band with a great future ahead of them. CM

‘This City’, a finely crafted tune with a great acapella breakdown.

Post Punk trio, PigsAsPeople have certainly ensured the campers are now wide-a-wake. The packed tent feels the ground shake beneath their feet from the second drummer Wilson starts pounding those drums like there’s no tomorrow while Bassist Chris and Guitarist Stevie take turns growling down the microphone, they’ve cranked the volume up to max. With quite a few fans in he crowd people just go bat shit crazy (the good kind though) new fans are also recruited here today moshing their heads approvingly. Astounded how three people can make so much noise, the guys carry on doing what they do best.  Ears ringing, they humbly thank Glasgowbury for having them and everyone else for coming as they close their set with the rather strangely, yet greatly titled ‘The art of leaving your house’ people are now climbing on to the shoulders of the person in-front keeping with the just lose control theme. ND

Chris yells into the crowd microphone-less they chant the words back and the noise just stops! Cheers emerge from the happy campers, evident that was one hell of a performance. 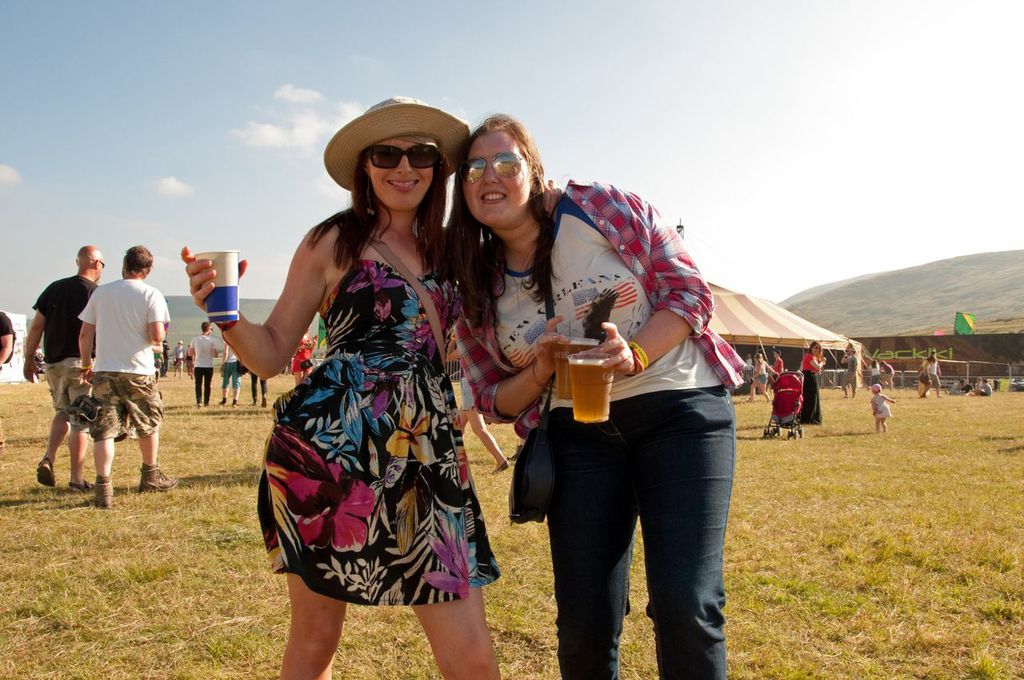 Despite suffering a string malfunctions early on, Hurdles put on  decent show during their debut (andsubsequently only) performance at Glasgowbury. The band have a strong indie-rock sound very much in the Phoenix/Two Door Cinema Club mold, and have some great danceable songs at their disposal, like ‘Pictures’ and ‘Roadrunner’, an infectious song which deserves to be a future single. However, at times the set seems to fall flat, with some of their songs not matching their high standards. A few months and a few new songs down the line the band are likely to be an unmissable live prospect, and its unfortunate that for the moment they just fall short. CM

“Kaleidoscope” is one of the strongest singles released by a Northern Irish group this year, and Hurdles do it real justice live.

Wonder Villains couldn’t have been given a better time to be playing in the G Sessions tent. With the sun at its strongest and most relentless, the G Sessions tent provides the perfect respite from the burgeoning heat. Of course, with the Wonder Villains, the crowd will instead be treated to tunes of the sunny variety, such is the warmth that surrounds the group. Anyone who has seen the band over the past year would be familiar with the majority of their set, given that it showcases many of the pop songs that they have been honing over the years, ranging from the Pokémon referencing ‘Ferrari’, the fizzy energy of ‘TV’, right through to upcoming single ‘33’. The band also introduce a new song into their set, the Blondie referencing ‘Debbie’, which sees the band incorporate 90s style rave piano into their idiosyncratic sound. Throughout their performance, it is impossible to listen without a grin the size of Calgary adorning your face, and as the band close their set with their terrace-ready anthem ‘Zola’, it is clear that this is a group at the top of their game who deserve to go stratospheric post-haste. CM

‘Space Jam’, their Michael Jordan-inspired ditty has become a sure fire live favourite, with the crowd chanting along to the middle 8. 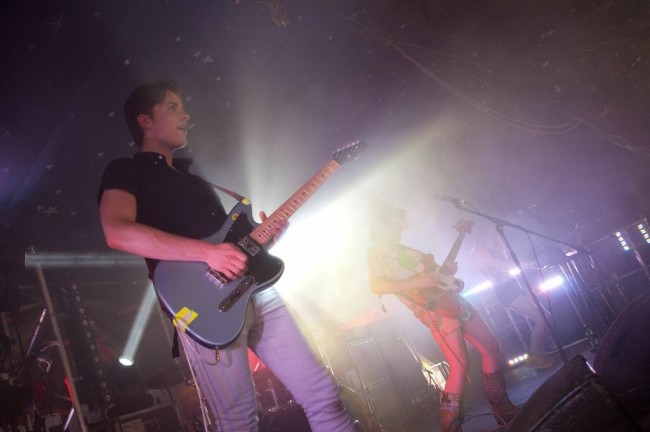 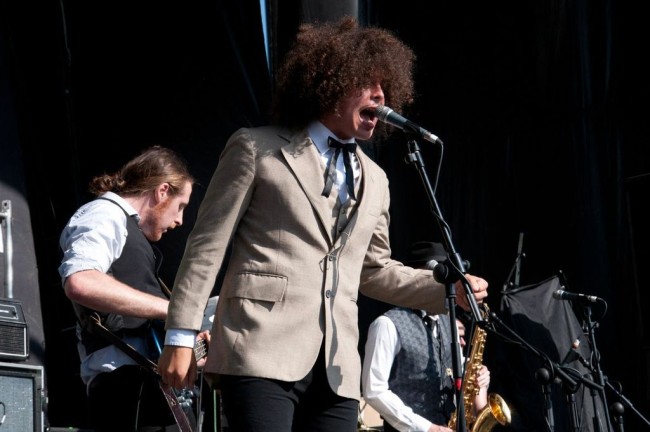 A generously sized crowd gathers around the front of ‘The small but massive’ stage under the hot evening sunshine here at Glasgowbury. The impressively dressed seven piece, The Dead Presidents take their place on stage. The sounds of funky soul with a rock ‘n roll twist soon fill the evening air. Opening with ‘Somethings gotta change’ Matthew’s soulful vocals attracts more and more festival goers to the front of the stage, almost like some sort of musical pied piper, the punters sing-a-long and dance while Matthew repeatedly asks the screaming crowd “Can you dig it?” The field is now a sea of boozy dancers enjoying what seem to be fans favourites ‘ Family man’ ‘Trying so hard’ they chant back every word. The band finish their set with ‘You can’t have it all’ a feel good song that absolutely must be played when the sun is shining, and a day like today it’s the perfect song to end with. The reception from the festival-goers is proof enough that this is one of, if not the best performances of the entire day. ND

Their set ended with the crowd engaging in an impromptu conga line. 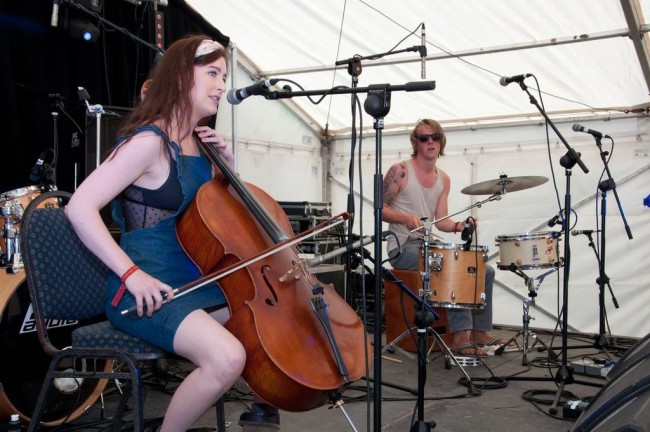 Of all the singer-songwriter-y acts on stage today, none are more unique or interest-piquing than Dungannon’s Alana Henderson. It’s rare enough to see a local artist using the cello as part of their live set-up, but when the artist is a) using it mainly for melodic rather than harmonic or rhythmic purposes, and b) also the lead vocalist, it does warrant your attention. Alana is a fine performer, as well as having a great command over the cello, she also has a fantastically rich voice, one which is very much steeped in the Irish folk tradition. Her lyrics in songs like ‘Wax & Wane’ and ‘Song About a Song’, are of a poetic slant, not too dissimilar to Emmy the Great, and coupled with the fine instrumentation, makes for a sophisticated, yet highly enjoyable music experience. CM

A great, spine-tingling cover version of the Arthur Russell song ‘A Little Lost’.

It seems rather unfortunate that artists who have travelled the greatest distances to be here in Draperstown tend to be some of the less populous draws at the festival. The crowd for Limerick group Windings barely reaches double figures throughout their set, which is a pity, as they are one of the most interesting groups playing at the festival. Although they can be most easily described as synth-rock, their sound hits many different sounds, going from spacious thrash-rock to Starsailor-esque Britrock over the course of their set. CM

The relentless rhythm of set closer ‘I am the Crow’. 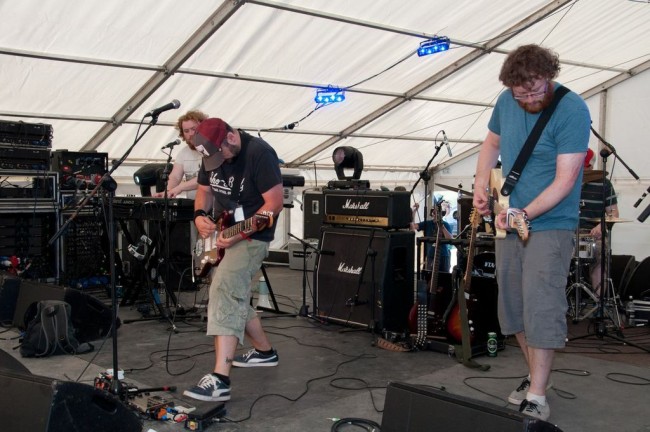