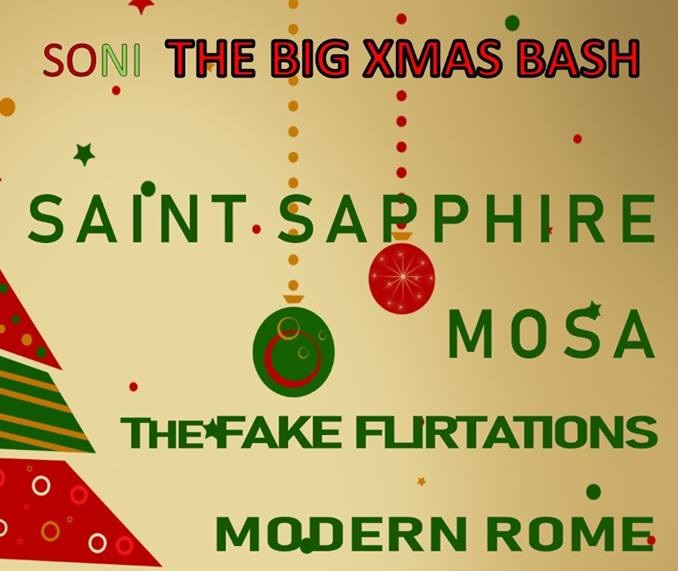 Music is getting louder.

A bald head, glimmering in the moonlight, nods me in.

The decorations hang low as my freshly stamped hand pulls the doors to The Empire open. And so, it begins

Christmas, it would seem, has arrived early this year. Sounds Of NI Radio has gathered some of the top bands in the city to play a group of punters into the Advent season. I arrive earlier than usual, one of the first there, and am greeted by local folk singer Joel Harkin. Tonight, however, Harkin is as much an observer as I am. He passes me a cold glass of honey coloured liquid as we discuss the ongoing ‘Fairytale Of New York’ controversy. We’re soon interrupted with a gentle “Hello there, we are Modern Rome.”

I turn just in time to see the quintet begin their set. Notably festive, there’s nary a head unadorned by a Santa hat onstage, the Belfast four-piece has established a solid reputation behind a unique sound and lively live set, one in which they preserve tonight. Deep, cavernous vocals carried a general sense of exclamation, while their rock opera vibe lent a hyperbolic element to their show that bordered on the melodramatic. Finishing with a mixture of Silent Night and an original number, their general air of freedom and sky-high breakdowns kicked the night off with a blast.

Then following comes The Fake Flirtations, a ramshackle bunch of alt-rockers with a penchant for high octane, energetic rock racket. Combining elements of early 2000’s rock and roll with a creeping indie bounce and alternative edge, the Flirtations had me unknowingly tapping my feet and giddy bouncing. Custom built for the modern rock era, with wily solos, rock funk and no obvious negatives, their focus on the fundamentals led to an awesome gig, brimming with headbangers and finger snappers alike.

Thirdly is four piece MOSA, an outfit that prides themselves on their live energy. I soon saw why. With a grander that suggested gothic cathedral and a filth that implied dive bar, their punky, grungy setlist was the most enthusiastic and rewarding of the night. Soaring rock and roll melodies accompanied a blistering hot guitar-driven set. Despite their indulgent grunge, however, they’re a tight, clean cut and well-oiled machine, with a vicious clout that only adds to their towering live presence.

Headliners Saint Sapphire is the last to take the stage. Their final show of the year, I was understandably excited. Having interviewed the group earlier this year, a ‘new sound’ was hinted at and I was eager to see how it played out. To call the show itself memorable is somewhat of an injustice. Frontman Sam Morgan offers a simple “What’s up?” before tearing into their scalding setlist. Genre-Ambiguous, with a little bit of something for everyone, Sapphire had an air of professionalism with a seedy, long hair swinging underbelly. With stage presence in spades and a mounting, ardent set, the new sound is a return to a harder, grittier, rock and roll root. There’s very little messing about, with the quartet separating the proverbial wheat from the chaff. The equipment, however, seemed to suffer from attrition as drummer Adam Walker’s relentless pounding nearly disassembles his kit. Morgan takes charge of the situation, playing a solo number while the band scurry around in the background performing the necessary repairs. Oddly comedic in a haphazard manner. Normalcy reruns after minutes of repairs and Sapphire end their show with a bang.

SONI once again manage to put together a quality show, pooling some of the best of local talent to perform for a lively, engaged audience. If the following shows are half as good, we are in for a treat.