Last year I had the sad duty of reviewing what at that time was believed to be the penultimate gig for Simon Haddock as guitarist in Trucker Diablo. He was leaving to commit more time to his family, unable to sacrifice any more time and money to the band, despite the band being (on the face of it anyway) on the crest of a wave. Then, a few months later, having originally intended to replace Haddock, head Trucker Tom Harte announced that the band was, at best, being put into cold storage. He also cited family and financial reasons.

So, what we had was one of the Province’s finest bands, who had just released a critically acclaimed second album ‘Songs of Iron’, had shows lined up on the mainland and on the continent and yet, who couldn’t go on any longer. As I said in a previous review, some will say that if musicians are talented enough then they will succeed. Some will say that if you back your talent enough you should move to where you will get noticed (and where it doesn’t cost you the guts of a grand to even get you and your band to gigs on the other side of the Irish Sea). But to me, that is over-simplistic. The music industry isn’t fair. To be talented but unable to use that talent (or make a living from it) must be one of the cruelest tricks life can play.

But the Trucker Diablo boys are back: ‘Back on their own terms’ is how their manager put it, ‘Back from the dead’ is how Tom Harte announced it. The band ran a pledge campaign to fund its third studio album, ‘Rise Above The Noise’ and tonight, at a packed Diamond Rock Club, is the official launch party to which all the pledgers are invited, with their names proudly displayed on the back of their new ‘Trucker Tees’. To be here tonight was one of the easier decisions to make and at £6 in…I mean well…’nough said.

The hors d’oeuvres  though before the welcome back party that was to follow are new-ish band Gasoline Outlaws. As I gave them a decent sized write up on their debut performance here a few weeks back supporting Maverick, I hope the band will forgive me for not giving them more coverage than I have for tonight’s performance. Just as last time, the band were squeaking tight, Matt Fitzsimons voice cut like a knife through the already charged atmosphere and Adam Parkin’s low, down n dirty guitar riffs are just as addictive as I remembered from before. It’s interesting to hear virtually the same set replayed, especially as these are still new songs to these ears. You do get a sense of which songs are going to be keepers and which may go by the by. For me ‘Nothing On Me’, ‘Lie’, ‘The Shrouded Wolf’ & ‘Heart & Soul’ remain the songs that impress the most, although a slightly edgier version of the acoustic-based ‘Stand As One’ was an improvement from the previous performance and does provide a nice contrast to the rest of the band’s material. The 4 lads are starting at a very good level already, but I expect more from them in terms of song-writing given more time together. Gasoline Outlaws took a crowd that was already excited and gave it a good work out, received a great reception in return and leave the stage to rapturous applause. We are well and truly warmed up for the shenanigans to follow.

So. Trucker Diablo is back, and with a bang – hitting us with the calling card ‘Drink Beer, Destroy’ first up; the wonderful refrain of ‘party goin’ on, party goin’ on’ ringing round the venue, which is now packed from the front to the back. The punters have been starved of the particular brand of hard rockin’ that Trucker Diablo has virtually made its own and it’s clear that both parties, the guys on stage and those crammed in at their feet, have several months of pent up frustration to get rid of. A souped up, fuel-injected, nitro-glycerin enhanced ‘Drive’ follows hard on its heels and the pattern is set for the evening in more ways than one.

This is a night to celebrate the release of ‘Rise Above The Noise’ and yes, as cracking new songs ‘Party Like They Started The End of The World’ and ‘Fight Life’ follow those two established favourites, it is clear we are going to get a liberal helping of the new album, but Trucker seamlesslyweave the new songs in with older songs from ‘Songs of Iron’ and debut album, ‘Devil Rhythm‘ seamlessly. So we get old favourites like the thundering ‘Red Light On’ followed by the bluesy ‘Voodoo’ but then new song ‘We Stand Strong’ which, tellingly, does not pale after those two or coming before the monumental (and personal fave from ‘Songs..’) ‘When’s It Gonna Rain?’ or the oldie-but-goodie, ‘Black & Blue’.

It helps that so many of the pledgers already know the songs off ‘Rise…’ like the back of their hands and, it is clear, totally approve of what messers Harte & Haddock have been up to these past months. I had already heard feedback from my network of friends who had heard ‘Rise…’ that it more than matches what had gone before and many claim that ‘Murder Ballad’ may be their finest ever song (praise indeed). After only one listen I have to concur, it is indeed a great tune. It only goes to prove that song-writers are song-writers and you never just stop, even if you don’t have a vehicle for those songs at the time. It’s not a tap you can just turn off.

We’re about halfway through and it is at this point the Trucker boys show they are not all about bluster and muscle. ‘Maybe You’re the One’ is full of emotion and feeling and, as I hear the crowd sing along, it’s hard not to get emotional at the thought we may not have heard this tune, from these guys at this venue ever again. But thank the Gods of Rock that we are getting to hear it again and, as it finishes and the opening, quiet, bluesy chords of ‘The Rebel’ herald the calm before the storm that is the rest of the song, you can tell why the Gods of Rock would themselves want to hear such fine exponents of the genre strut their stuff again. The main riff would loosen the bowels of mere mortals, just not the hardy D.R.C. faithful. It’s time also to give a welcome to the new guy in the band in Jim McGurk. He’s got his own style, slightly different to his predecessor but, to these ears, it sounds mighty good. A band like Trucker Diablo needs a strong rhythm section and in Terry and Jim, it absolutely has that.

New songs ‘Sun Deprives The Day’ and ‘Take Me To The River’ both exhibit trademark Trucker power, but also show they are capable of hitting a different groove at times. ‘Juggernaut’ merely does exactly what it says on the tin as it pops up between those two new songs and the excellent new one ‘Don’t Cry’. As we near the end of the set, my overriding feeling from the night is ‘joy’. There is joy on the faces of the band – and at this point I’d like to give a major thank you and appreciation for the photographs that feature on this review, from Sinead McGoldrick York, who beautifully captured this in her images, both onstage and backstage. I felt I needed to use both onstage and off-stage images to really show (far better than my words ever could), what it means for these guys to be back doing what their talent demands. This is a celebration and the band clearly wanted the Diamond Rock Club to be the venue in which to hold this celebration. So set-closer ‘I Wanna Party With You’ is more than apt.

Cries of ‘More’ and ‘Truckeerrr’ ring round the venue and in no time the boys are back, cracking into the catchy new song ‘Girl In The Photograph’ followed by a wonderful version of the Bob Seger track that Thin Lizzy made their own back in their heyday – ‘Rosalie’ (although ‘The Boys Are Back In Town’ would have been very fitting too – perhaps a little too obvious). But Trucker Diablo is back. Thank the Gods of Rock. Let’s hope they stick around this time. 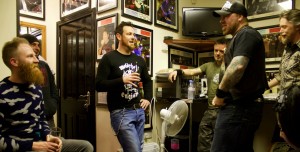 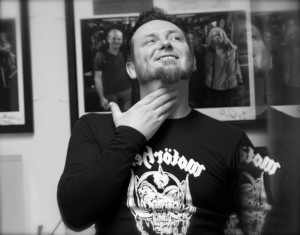 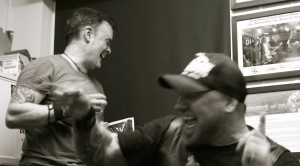 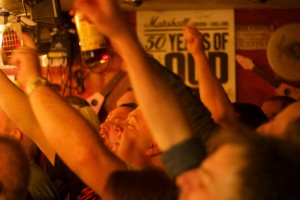 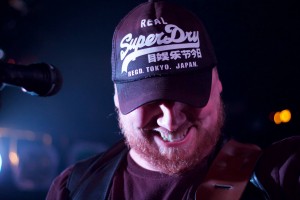 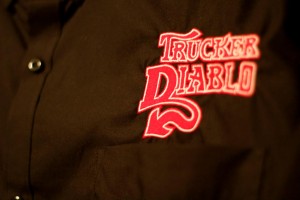 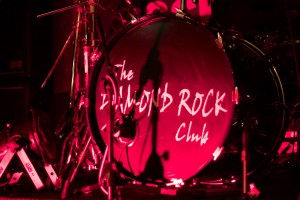