Echo Raptors – Turn Into One 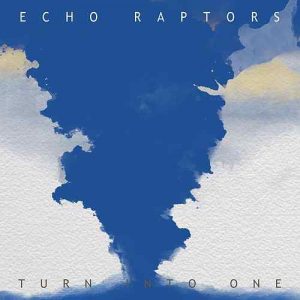 One of my favourite quotes about music comes for legendary producer Dr Dre, who once told a then-aspiring Eminem that, when in the song writing process you must “work hard to get it, and TWICE as hard to maintain it”, with the metaphorical ‘it’ representing the mind-set of writing a good song as opposed to writing a ringtone for a quick cash-grab. ‘It’ happens to be, simultaneously, the easiest process and most difficult obstacle for every young musician and band to grapple with. The compositional world is your oyster, and yet with so much to choose from how do you separate the wheat from the chaff.

This is especially true when it comes to the indie rock bands of the last decade, wherein it becomes a bitter struggle to merely separate yourself from the pack while maintaining the basic and enjoyable aspects of indie rock that made bands like Kasabian, Arcade Fire and Arctic Monkeys household names. Yet, it would seem that Belfast formed Indie/Alt-rockers Echo Raptors suffered very little of these difficulties, releasing a widely well-received EP, “She’s so Free” in 2013 and following it up with “Turn Into One” last year. The Belfast four-piece have had a whirlwind career as of yet, with live appearances alongside both the Happy Mondays and The Charlatans on their resume as well as being described as a dynamic and exciting band that “have the ability to make you start believing in rock and roll again” (Encore NI). Obviously, their newest EP has quite a reputation to live up to.

‘Edge Of The Earth’, is a strong start to the EP as the first thing you notice is the singing chops of front man Philip Rainey which manage to sound clear and crisp, without the need for over production. Indie tinged vocals and harmonies are flanked by an assortment of Britpop flavoured guitar that you could be forgiven for mistaking as early Oasis. Read anything about this band and you’ll hear the comparisons to The Stone Roses or Oasis but I would contest that the unique vernacular and clear Belfast-punk influences also makes them highly reminiscent of a friendlier version of Stiff Little Fingers. There is a clear focus on the simplistic within this song, but do not take this as criticism. Too many times will a band over reach in an attempt to become the next Bowie or Radiohead, while Raptors keep their feet planted squarely (thankfully) on the ground. Simple is good, desired even in the modern musical landscape. Reminiscing of both Oasis’s ‘Rock n’ Roll Star’ and Stiff Little Fingers ‘Beirut Moon’, ‘Edge Of The Earth’ demonstrates that the Echo Raptors won’t be forced into something they don’t want to write. Instead of sharpening their weaknesses, they’ve doubled down on their strength to a tremendous result.

The title track of the EP, ‘Turn into One’, features as the second song and continues the strong showing from Raptors. Capitalising on their theme of “we’re not having the best time and that’s okay because it’s okay to not have the best time all the time” and perhaps even inventing a new genre along the way (I’m dubbing it “Indie Gloom”), this track ditches the Oasis comparisons for a more radio friendly Verve inspiration. Particularly those porcelain smooth vocals from Rainey that accompany lyrics which are disarmingly charming in their honesty. It is easy to see that the band have discovered a formula that works. It is clear that many hours of writing and rewriting, practice after practice went into the construction of these songs that walk the line between serious and carefree, with none of the pitfalls that many of their peers fall for. The percussion never exceeds the rest of the composition in importance and the featured guitar solo (thank god they wrote one, I was starting to get worried) fits like a glove with the rest of the music.

The Final track, ‘Wake Up’, seems to blend a “Mardy Bum” inspired riff with a notable return to the earlier Oasis influence. Suitably, the ironic and amusing lyrics coincide well with the blue shirt riffs of this early Britpop track. However what continues to surprise about the Echo Raptors is the apparent ease that surrounds this song. Like an old friend, there is something about ‘Wake Up’ that sounds natural as if the gnashing guitars and easy percussion all fell together like a jigsaw. There’s a sense of Deja vu as if you’ve heard this before, however, this is far from a bad thing. It’s comfort listening at its finest and a fitting end to a fantastic EP.

Perhaps the most amazing thing about this EP is that nothing feels forced. Echo Raptors clearly found something they were comfortable writing and polished it further with their newest EP, leading to a towering sense of joy. It is transparent that this group loved writing these songs and, as infectious as it is, you can’t help but love them yourself. What more can you ask from a band?

Bird & Bramble: When You’ve Made It