by Peter Cinnamond
in Music Reviews 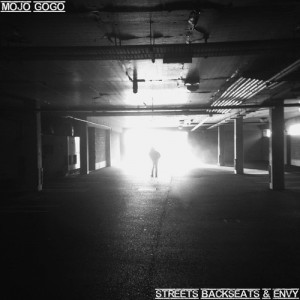 Seemingly beginning life on cover of Hot Press, Co. Donegal’s Mojo GoGo were swamped with hype before they’d even decided on they if wanted to be one of Ireland’s ‘hottest bands’ in the first place. But in this day and age you can’t bemoan exposure, though it has meant that their steady development has occurred under the captious heat of a magnifying glass.

With a few EPs already under their belt, ‘Streets, Backseats & Envy’ sees the quartet take a step back from preppy indie rock to ramp the guitar noise and add some fist pumping sing-a-longs. Cheeky lead track ‘4.20’ has all the boisterous aggro which we’ve seen flashes of before, except this time sustained for a full radio friendly three and half minutes.They’ve toyed with some brit-pop conventions on pervious releases and elements of lad-rock does float above the surface on tracks such as ‘Over’.

Niki Pollock is a commanding lead vocalist and is suited to the more corrosive rock tunage. Add in the duelling guitars and shadows of Irish legends Thin Lizzy begin to loom large over their current musical direction.

Lyrically Mojo GoGo are authentically grounded. Living for the weekend and sobering heartbreak are topics which we can all hang our hat on. But they do it with such an abrasive strut that it feels slick yet also genuine.

That abrasivenss could be atoned to the band becoming smitten with records like ‘Youth And Young Manhood’ and ‘Aha Shake Heartbreak’. For a group who obviously have some youthful discontent which they’re keen to express, those are not a bad records to be inspired by. While indistinguishable vocal delivery has luckily been left at the door, some riff heavy exuberance has given the Donegal foursome a potent edge which has been missing in recent times. ‘No’ is their most endearing nod to the Followill clan; rough round the edges suzzy rock with a huge ‘Woah Woah’ chorus.

No doubt about it, this is their best work to date. After a year or so of writing and working on their craft, they’re finally starting to live up to that early promise which had them pencilled in for stadiums before they’d even sold out their first pub. This EP is as a good as anything you’ll hear from a new band across the UK right now. It’s vibrant with a polished sound, but most importantly it has purpose.

Fiona O’Kane – I Can’t Help Myself