Nerdmore – All My Dopes & Screams 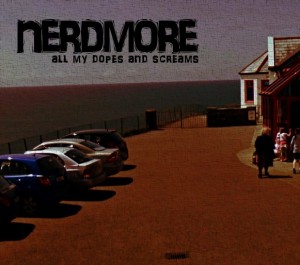 2002. A year that saw Avril Lavigne release her debut album ‘Let Go’ with the mega hit ‘Sk8tr Boi’. Good Charlotte released their sophomore album ‘The Young & The Hopeless’ which spawned the single of the same name (and many more) and Blink 182 and Green Day co headlined the Pop Disaster Tour. All in all a good year for punk/pop punk/avril lavigne music. The reason behind my 2002 tenuous link is due to the fact that when I first listened to Nerdmore, I felt like I was back in my long Dickies shorts and Vans shoes. This is by no means a slight on the band.

Nerdmore are a 3 piece DIY punk/pop punk band from the north of Ireland. Their bio states “playing music & having fun”. This is clearly what they do. From the first track ‘Bitten By The Zombie Jesus’ it’s clear these guys are having fun. With enough woah woahs to keep The Offspring happy, Nerdmore have found their sound and they’re sticking to it. Somewhere between Ramones and Green Day, these guys sing about everything from throwing rocks at girls, hating peoples guts to, well…zombie Jesus. The fifties style doo wop opening of ‘Throwing Rocks At Shatter Proof Walls’ had me hooked from the start. For a genre of music that we’ve imported from the states, it’s refreshing to hear it with our own norn’ irish accent. Whilst it is nothing new, it is fun and the perfect soundtrack to the glorious weather we’re having.

The last track ‘Dead & Resigned’ starts with just bass, drums and vocals until the guitar kicks in and we hear about ambitions to fly into space to start again. But in the final part of the song we’re told ‘But we all know that this would be impossible. So another stupid punk rock song is all that I can do’.

For only starting in January of this year and two EPs under their belt so far, it’s safe to say we’re going to hear alot more ‘stupid punk rock songs’. This EP is already on my iPod and on repeat daily. It’s catchy, no nonsense pop punk fun. Now I just need to find my old Dickies shorts.