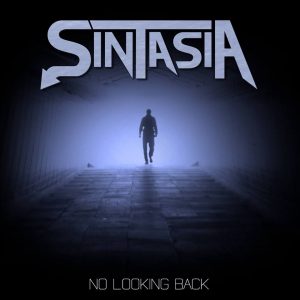 In today’s fast paced world, speed certainly seems to be an essential element for many new bands: settling on your sound and getting that EP/album out toute suite is almost a necessity, in order not to be left behind. It can be a tough call for a newly formed band; many land on their feet, some do not.

One band firmly in the former category is Lisburn’s Sintasia. Forming less than a year ago in July 2015, the band have already gone through a lineup change and a swerve in the direction of their sound, making them seasoned professionals almost before they’ve started, really. No Looking Back, their debut album, was released a mere four months after their formation, on the back of several gigs and containing at least one single in ‘They’re Gonna Fight’. A quick perusal of their Facebook page shows a new single (‘Not Alone’), but also, rather confusingly, an announcement of a thus far unquantified break for the band (boo?). Time will tell, it appears, what comes next.

The album opens in basstastic fashion with ‘Finding the One’, a rather jaunty, metal-edged rock tune which is a wee bit grungy and a wee bit late Nineties rock – think silverchair and you’d be on the right track. Next track ‘Hero’ showcases the impressive lower end of vocalist Ryan Belshaw’s range whilst adding a touch of New Grave to the mix. Single ‘They’re Gonna Fight’ is next, and although it’s a punchy and at times delightfully slinky number, it’s not the strongest on the album – possibly ‘Hero’ would have been a better choice.

The next three songs (‘Manipulation’, ‘I’ll Be On My Way’ and ‘Life’) are heavily influenced by Nineties American rock from the Keep the Faith/These Days Bon Jovi school of rock. All jangly guitars, ballad-y intro’s and beautifully raspy vocals, they’re very ‘grown up rock’ but certainly not dull in any way: nostalgic but timeless, if you will.

Second to last track ‘No Looking Back’ harks back even further, with a melody reminiscent of Fleetwood Mac’s ‘Go Your Own Way’ and matching wistful yet determined feel to boot. It’s final number ‘I’m Not the One Insane’ that is the true highlight of the album however. Blessed with a bracing metal riff and brisk, finger-pointing feel, and with lyrics in defence of conspiracy theorists (interesting topic), it contains the most attitude and strut of all the songs and is a welcome dose of kick-ass.

Four months to form, create their desired sound and record an album – all impressively fast, right? The result is, it has to be said, really rather special: it corralls their influences and creates something that is both promising and enduring. Approaching hiatus aside, it certainly will be intriguing to see what Sintasia come up with next.