The Crawling – In Light of Dark Days 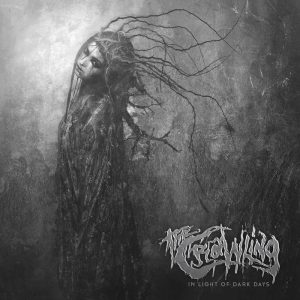 Lurking in the shadows of Northern Ireland’s music culture is a healthy and vibrant extreme metal scene, showcasing the best doom, death and black metal that the province has to offer. These bands plug away determinedly, recording and gigging and honing their dark crafts to a loyal and knowledgeable audience.

One such band is Lisburn’s The Crawling who emerged in late 2014, created by three veterans of the extreme metal scene: vocalist and guitarist Andy Clarke, who fronted metallers Honey For Christ; bassist and vocalist Stuart Rainey from death metal legends Severance; and drummer Gary Beattie, who still plays with death metal whizz kids Zombified. Within a year they had enough material to record their debut EP In Light of Dark Days, which was released on Grindscene Records in October 2015. Then, to cap off a near perfect year for the band, they won 2016’s Metal 2 the Masses here in Northern Ireland (you can read about the final here) and played the hallowed grounds of Bloodstock Festival just a few short weeks ago.

The EP opens in suitably ominous fashion with ‘The Right To Crawl’, with an enthralling snarly riff throughout and Clarke’s deep, throaty vocals spat with disdain towards the subject of the song (“You spread defeat like an antidote to try…the only thing you’ve earned is the right to crawl”). The speed of the song waxes and wanes between slower and faster sections which adds real texture, while the song itself is tightly controlled but still with a deep sense of foreboding and barely reigned in contempt.

Track two, ‘End of the Rope’ also has a fairly restrained intro, before a doomy riff along with the vocals and the atmosphere drops several degrees. Containing both the chug of doom metal and the coldness of death metal, it’s that chug that drives the song, while the images conjured up are as eerie as hell (“her blood runs cold…bring her home”).

It’s the last track, the eight and a half minute long ‘Catatonic’ that really shines a light onto their shadowy brilliance. Beginning with a storm soundtrack, its ominous, creeping intro gives way to a sawing riff and a rather tragic tale of watching over a loved one in a coma (“Leave the wires that tie you down”). The song has a doomy, gloomy ebb and flow, with some magnificent drumming throughout, particularly the faster sections. The song builds in intensity to its conclusion (“I miss him. Now let me go”) before fading to a desolate outro that will make you shiver.

Behind the pop, indie rock and dance music that makes the headlines here in Northern Ireland, the metal scene – and indeed, the extreme metal scene – is just as exciting and engrossing, as is clearly demonstrated on The Crawling’s debut release. If you like your music with a bit of darkness, blood and atmosphere, this is an excellent place to start (or continue) your descent away from the light. Come this way…