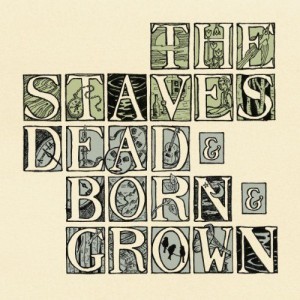 The three sisters that make up the Staves are not your quintessential pop-stars. Indeed their soothing folk sensibilities distinctly stand out against much of the RnB and dance tracks that clogs up the Top 40 chart. It is most likely that the trio were picked up due to the critical and commercial success of folk darlings Laura Marling and the mighty Mumford & Sons.

A major focus of their lyrics tends to be on that of beautiful landscapes twinged with feelings of regret and sorrow. Despite the tones of regret the songs swoon and when the three sisters harmonise, one might say it is angelic in nature. Opener ‘Wisely & Slowly’ perfectly demonstrates this as it only features the girl’s voices right up until the last minute. Acapella is a risky business at times particularly as an opener but it is a triumph. There is no doubt that the album’s strength lies in the vocals; calm and soothing, it is perfect for those with a disposition towards late night listening (like now when I am writing this review!). ‘The Motherlode’ is the standout track, and while it doesn’t vary too much from the traits of the album, it is the simplicity of the guitar and melodies that move it to the top of the pile. For those that would like to tap their feet, ‘Tongue Behind My Teeth’ is your best bet. It lays down more prominence to those guitars and drums but still sits firmly within the haunting folk boundaries.

‘Facing West’ is also worth a mention with the sole instrumentation being a ukulele and the odd whistle but it just helps draw the listener back in to the dreamy vocals. Each track is like a small piece of a jigsaw puzzle and by the time we reach the closer, ‘Eagle Song,’ we have sampled a flowing and charming little album. While I have heard other reviewers comment that perhaps a change of pace now and again might have livened up proceedings, it would have subtracted from the concept of the album. Hopefully the legions of Bon Iver fans who have witnessed their live show (see my own thoughts here) will buy enough copies that we will witness a second album from these alluring harmonisers.