We promised our first gig wouldn’t be a one off, and since we don’t like to go back on our word we can now reveal that LORIS will headline our second show!

LORIS have been working hard to finish their debut EP, ‘YEAH’ and will exclusively launch it at our show on Friday 14th November 2014 in The Bar With No Name. Support on the evening will come from Those Ghosts, Havana House Party and Owen McGarry. 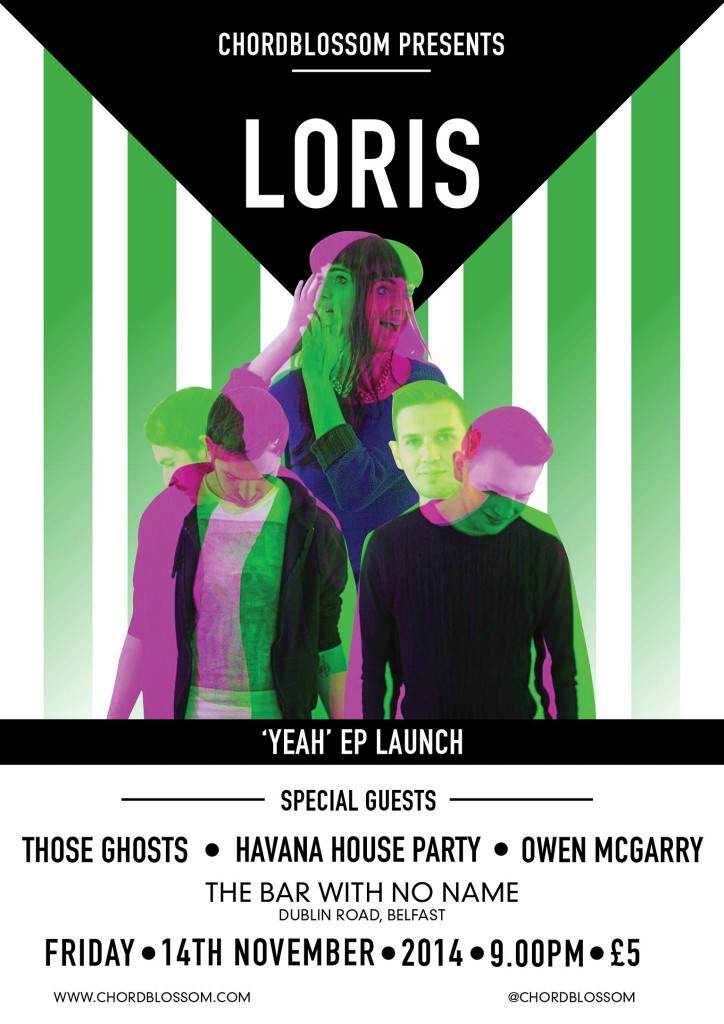 LORIS turned quite a few heads with their debut single ‘I’ve Been Quiet’. Seemingly coming out of nowhere the track quickly garnered approval at BBC’s Across the Line and racked up some airplay on Jen and Ally’s BBC Introducing show. The female fronted trio have their feet firmly planted in the 80′s with synth based pop being the order of the day. Their debut EP is being produced by Michael Mormecha (Mojo Fury) so expect it to sound hugely emphatic, particularly in the confines of The Bar With No Name.

Our love for bands from Strabane is well documented but it was the alt rock stylings of Those Ghosts that started the affair. The band walked away as winners of our 2013 Kickstart competition and have released several singles fit to reverberate round any stadium. Plus they’re impressive enough to sell out their debut live show without having released a track, not many bands can say that.

Whenever local bands go quiet, there is always the worry that they’ve decided to call it a day; Havana House Party fitted under that bill for quite a while. Thankfully they are very much still on the go and the indie rockers are keen to make their mark. They gravitate towards the same indie electro formula that took Two Door Cinema Club to the top and on their day you’d be a fool to bet against them gaining the same momentum.

Singer songwriters are a dime a dozen, but what sets Belfast’s Owen McGarry apart from the rest is the fact that he is captivating both onstage and on record. On top of all that you must factor in his dedication, from playing gigs around the streets of Belfast, to playing in Los Angeles, to recently announcing a tour of Switzerland.His new EP Stray is full of engaging songs built alongside various forces with the Northern Irish music scene and must be seen & heard live.