The Hard Chargers ⁞ ‘Spanner In Your Works’

I reviewed The Hard Chargers a few months back with their ‘Fine N Filthy‘ single and I’ll reiterate now what I said then, these boys are the real deal. They are a proper Blues band not guys who think the Blues began with John Mayall and ended with Led Zep’s ‘recycling’ of old Blues tunes into Heavy Rock. Listening to these guys makes you imagine yourself sitting in a bar on Bourbon St, with a whiskey in one hand and a woman on your arm who’s getting better looking with each sip and these guys playing in the corner. In keeping with that image, with your eyes closed you envisage some haggard black dudes, fresh from meeting the Devil at the crossroads, attacking this song with demonic fervor. But no, the demonic blues wail belongs to Chris Todd, and he is ably assisted by David Thompson and Richard J Hodgen. Three (very) white dudes from Belfast playing genuine Blues music with some aplomb.

‘Spanner In Your Works’, like its predecessor ‘Fine n Filthy‘, is a gloriously irreverent blues romp full of double meanings and bar room sleaze. It virtually explodes out of your speakers, with its grungy blues riff and the aforementioned Todd’s voice. It batters along with no let up thanks to the tight rhythm section; it’s short and to the point. ‘Jojo’ features slide guitar and, if anything, is even more irreverent and sleazy than ‘Spanner…’ with lyrics I couldn’t possibly quote here.

I think you just have to take your hat off to a band that does its own thing and doesn’t compromise, but more than that, The Hard Chargers are a good listen. Simple as that. Having seen them live, I can tell you they play a mean gig too. So what are you waiting for?

‘Spanner In Your Works’ is out now. Check ’em out at https://www.facebook.com/hard.chargers.5 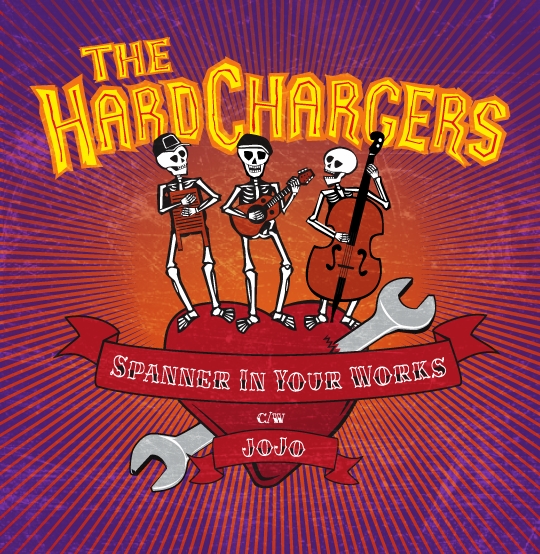