by Robert Brown
in Win

We are pleased to announce that our very successful Kickstart competition is back for 2014. Aimed at giving a local band or solo musician a much needed push towards breaking out. Our past winner’s SOAK and Those Ghosts both benefited greatly from winning and we hope this year’s winner will have similar if not better success!

Musicians of all kinds from Northern Ireland are invited to get involved with the competition. No matter how young, old or what genre you play. As long as you haven’t released a full length album, you’re eligible!

After the first round of submissions are complete, a shortlist of twenty acts will be decided by the site’s writing staff. These twenty will then be put forward to a public vote which will narrow it down to the Final Five. The concluding round for the artists will be a showcase gig in association with Belfast’s Queens Radio. On that night a collection of local music industry experts will decide the winner of Kickstart 2014!

So lets get down to the nitty and gritty detail. The prize fund for our 2014 Kickstart winner includes:

► Single Recording – Courtesy of Millbank Studios
With recording time being an expensive drain of many musicians resources, we thought it was perfect to give our winner the opportunity to record a single. Millbank Studios are well renowned locally and with a client list that includes Rams’ Pocket Radio, The Rupture Dogs, A Plastic Rose and Malojian you know you’re going to come away with something awesome.
►  Video for your Single – Courtesy of Dog Kennel Productions
Often the best way for a band to get themselves noticed is to have an impressive video that spreads like wildfire. Dog Kennel Productions may be a relatively new outfit but Mojo Fury trusted them to produce their stylish comeback video for The Difference Between and also have credits with Deadlights and newcomers Loris.
► Festival Slot – Courtesy of Stendhal Festival of Art
Many go to festivals solely to catch their favourite bands but you always discover some great new bands while you’re there, will that be you in 2014? Stendhal festival has come on leaps and bounds in recent years particularly last year when they managed to get Neil Hannon of  the Divine Comedy to headline.
► First Play of your Single – Courtesy of Electric Mainline
Radio airplay can be the hardest thing to attain now with many commercial stations just playing the top 40 on repeat. Fear not though, as Stephen McCauley of BBC Radio Foyle’s Electric Mainline will play your single live on air as soon as it has been recorded.
► Professional Career Advice – Courtesy of Third Bar Artist Development
So you’ve recorded your single, played a few shows but where do you go next? Third Bar Artist Development, a joint enterprise between Davy Matchett and Gary Lightbody will sit you down and discuss how to take your career to the next level.
► 1 Month PR – Courtesy of In Your Steps
Getting the message out there that you have just recorded a new single or video can be the most time-consuming part of a musician’s life. In Your Steps, a Derry based Music Management & PR company will look after all your PR requirements and will ensure your promotional strategy is a success.
► Graphic Design for a Poster along with Printing – Courtesy of Love Print & Design
Another costly expense is the design of and print of posters for your live performances. It is true that social media is a big help but nothing beats a poster that grabs your attention. Love Print & Design have worked with Laverys, Boojum and David Meade and will provide a slick design for your poster.
► CD Duplication – Courtesy of Botanic Media
So you’ve recorded your single now you just need to get it to the masses. Botanic Media will provide you with 50 copies of your new single for you to distribute how you see fit. Previous clients have included Ben Glover and The Bonnevilles.
► Single Artwork – Courtesy of DSNT
There is no point in having a stunning new single if you don’t have some spectacular artwork to grace the cover. Never fear as DSNT have kindly agree to design your single sleeve. They are a multi-disciplined creative company based in Belfast and have worked with the likes of Ryan Vail, Ghosts and Unknwn.
► Professional Photoshoot – Courtesy of Barry Wright
Before your new PR team start mailing everyone under the sun with details of your new single, they need to have a nice mugshot. Step forward local music photographer Barry Wright. Fresh from setting up his own studio he will turn you into a sauve and sophisticated dream for any publisher.
► Professional Biography – Courtesy of Write It For Me
As well as having that stunning new photo you will need a suitable biography to grab everyone’s attention. The lovely team at Write It For Me will work their magic and come up with a spiel that anyone trying to sell snow to the eskimos would be proud of.
► Belfast Gig Support Slot – Courtesy of Shizznigh Promotions
Support slots around Belfast can be like gold dust particularly for new musicians trying to make it. Thankfully for you the illustrious Shizznigh Promotions who have put on some truly memorable shows (Try the double album launch last year in the Mandela Hall with Mojo Fury & The Rupture Dogs) will add you to one of their line-ups.

You simply need to send an email to info@chordblossom.com with the following information: 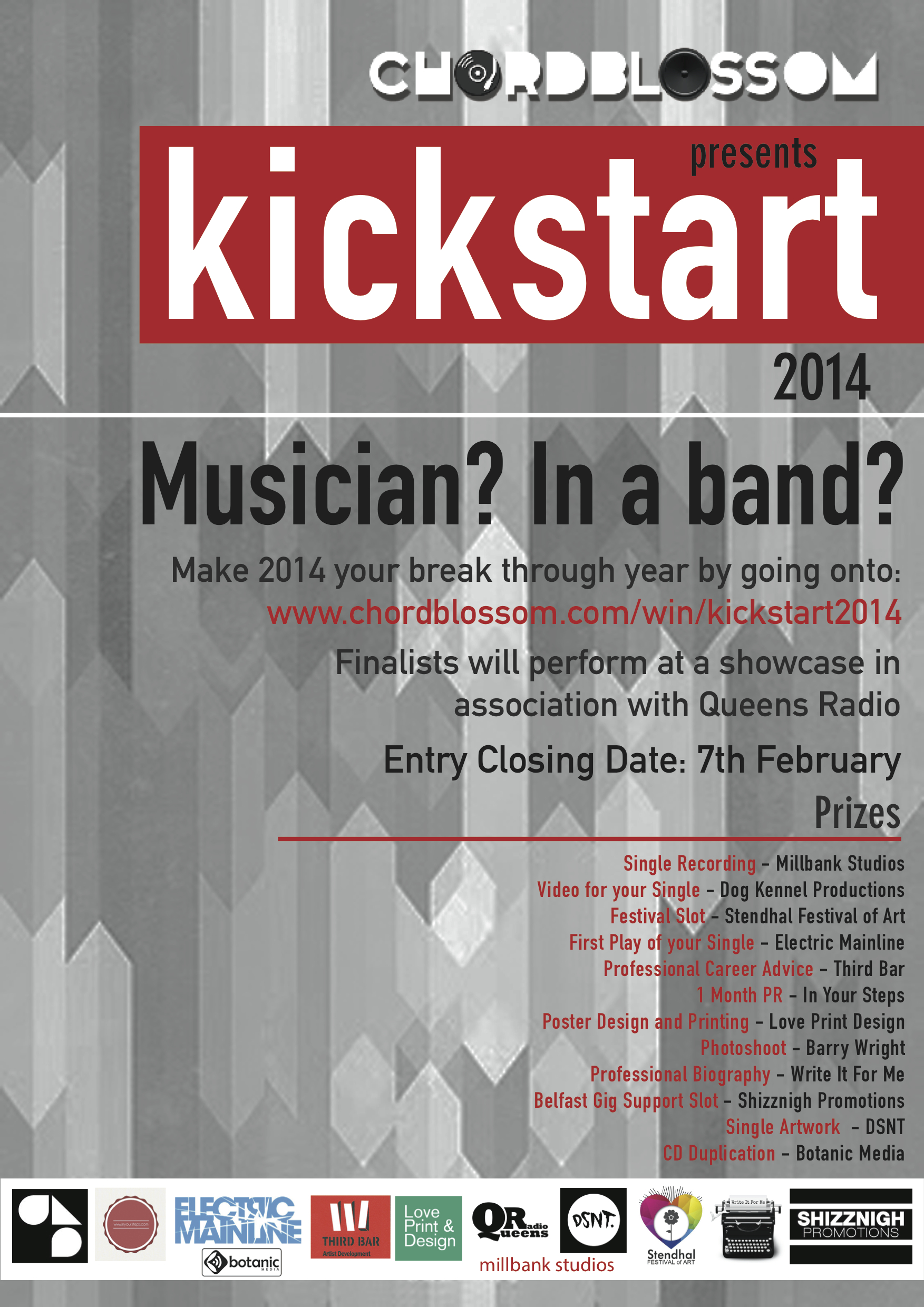