Food trucks, families and unpredictable Northern Irish weather. Moira Calling festival returns for a second year. And the kids at Moira march to the beat of their own drum… literally, with a band of samba playing youngsters greeting me on arrival. You know it’s a hipster festival when there are kids in LCD Soundsystem ‘Losing My Edge’ T-shirts dancing and rolling in the mud.

Brand New Friend, the first highlight of the festival, as usual add a light-hearted feel to the main stage. Their energy is contagious and their catchy songs drag the stragglers off the festival fringes to their set. They open with ’90s-style rock ballad ‘Cold’ which descends into a Taylor Johnson guitar-shredding performance. They play new single ‘Hate It When You Have To Go’ which is about new love and Johnson confesses, “I may be blinded by the future but I don’t have a selfish heart”. Frontman Johnson explains how he “nearly killed the soundman” only two songs in – the unfortunate tech guy was onstage as the Brand New Friend ruckus started.

The charisma and enthusiasm drips off these performers and the festival kids get it. “The group of children dancing is making my heart smile,” says an ever-gushing Taylor, “Everyone should be more like those children”. Indeed. They play ‘Mediocre At Best’, a song dedicated to “all the mediocre people in the world”. After a summer full of festival dates, Brand New Friend are anything but mediocre. 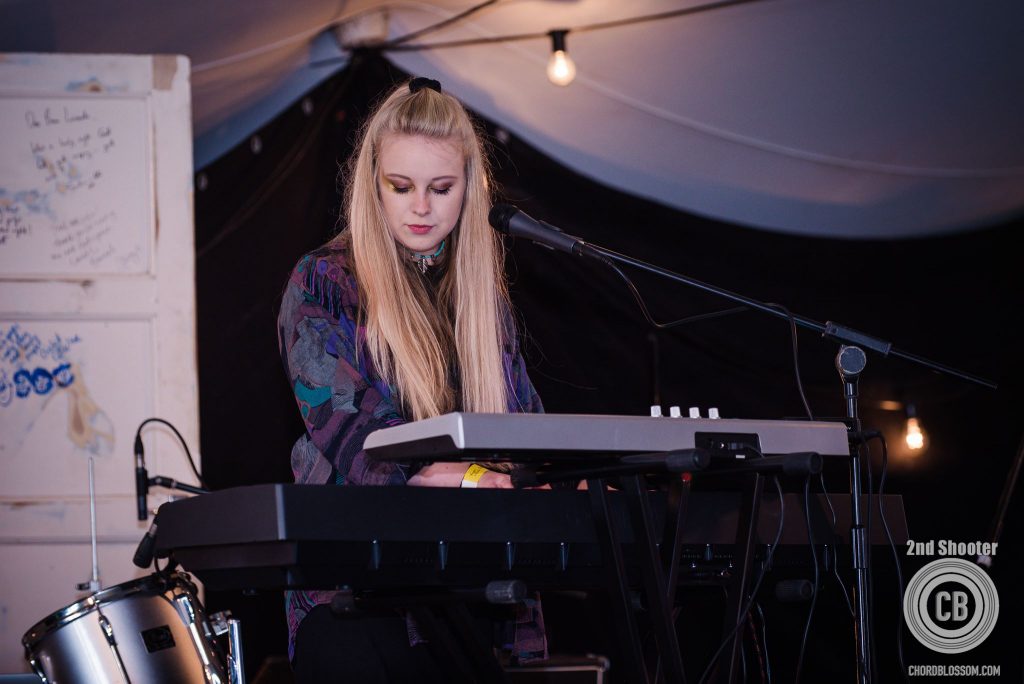 Rebekah Fitch takes the All The Little Lights Stage next. The stage is decorated with wooden doors (which is a tradition for the bands to sign), a chandelier and cozy lights. Fitch’s pop star presence and classical training merges into a musical theatre performance. She uses loops to create a cloud of sound and it reminds me of the likes of Katharine Philippa; combined with a voice like Florence and The Machine and other exceptional acts. She opens with recent single ‘Another Show’ and employs the ‘millennial whoop’ vocal technique. It’s her last song, ‘Not Myself’ that channels Katharine Philippa the most as she takes out a flute to loop into the music. The song is spacey and shows off her piano skills.

This festival caters to all music tastes with brass bands, indie rock artists, techno performances and pop tunes. Stomptown Brass make an impression on the main stage. The synchronized dancing and the movement of their instruments is a powerful vision. The tuba is effective and reminds me of early New Orleans jazz when they’d use a tuba instead of a bass.

Recently signed Brash Isaac take a cool approach at the Lights stage. Their medium is alt folk rock. Their guitars are a visual all by themselves, rocking pastel green and glittery silver. They are developed musicians and with memorable lines like “I’m singing with John Lennon; all good children must go to Heaven”.

Girls Names return after a 10-month hiatus with a new female drummer rocking the toms. They wear their customary black, their manner is moody, and the sun seems to be sucked away as soon as they start playing. No-one can take their eyes off effortlessly cool bassist Claire Miskimmin. 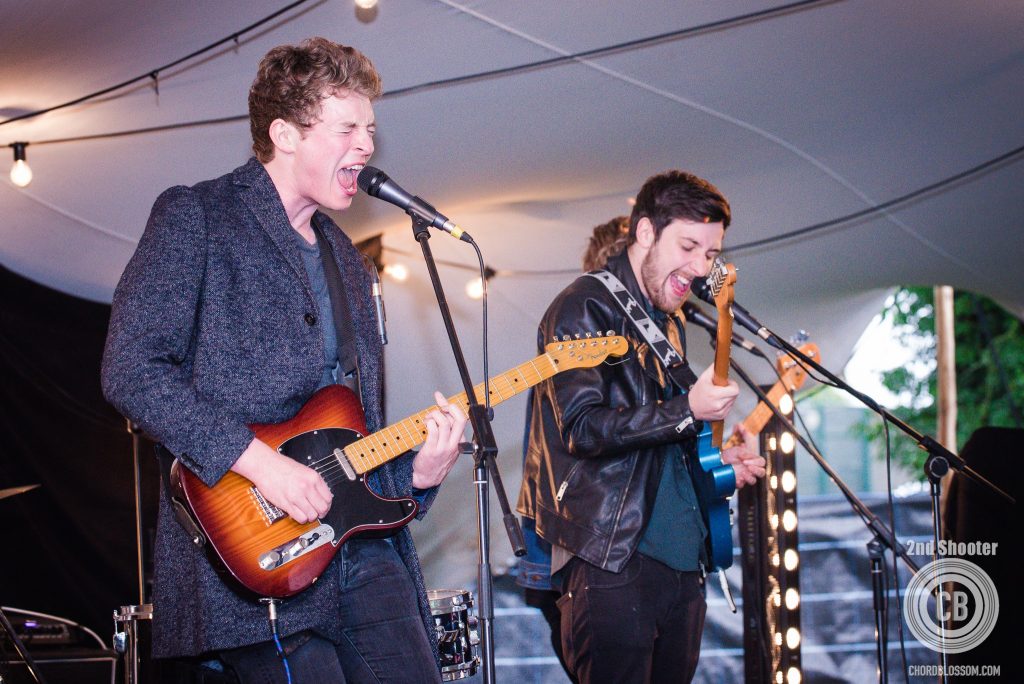 Silences create a memorable show with eerie voice and ringing guitars. Frontman Conchur White takes the mic off the stand for first song and isn’t afraid to move around the stage, mouthing the line “You’re not shy in the spotlight”. He addresses the audience, “Do you feel like you’re in a living room? Do you want to stand up?” He is right – the cozy tent is filled with wooden benches and the string of lights and paper decorations create an intimate atmosphere. A few fans are on their feet for ‘Red Dress’, their latest single that I’ve been playing on loop since its release. The breathy voices and chilling harmonies really are affecting. They channel Coldplay and Villagers. Their last song is ‘There’s a Wolf’ permits Conchur to howl at the audience and beat a drum to death.

The Emerald Armada start modestly but convince the audience of their upbeat charm with the third song, ‘Bodies Roll’. Neil Allen wears his signature beanie and the rest of the ensemble wear hats in the bracing Autumnal air. Thankfully The Emerald Armada are a band you can dance to and this warms us up. All the children take to the front of the stage for the Armada’s folk-pop music. Allenexplains how half the band went out last night and he had to ring guitarist Tony’s dad to wake him up! They play favourite, ‘I Don’t Mind’, a song they say was what “got them first playing shows”. They ask everyone to sing along and even giving me and the family a shout-out, “I’m looking at you Bailies”. The last song is ‘Be Loved’, for “all the couples or anyone just on the pull”.

Orchid Collective are a bit hipster and play serious music for the descent into dusk. This band clearly play by the “suns out, ankles out” code with their rolled up jeans accompanying their dreamy indie music. Their best received song is an emotional cover of ‘To Build a Home’ by Cinematic Orchestra which they’d put on an album for for Aware, the mental health charity. 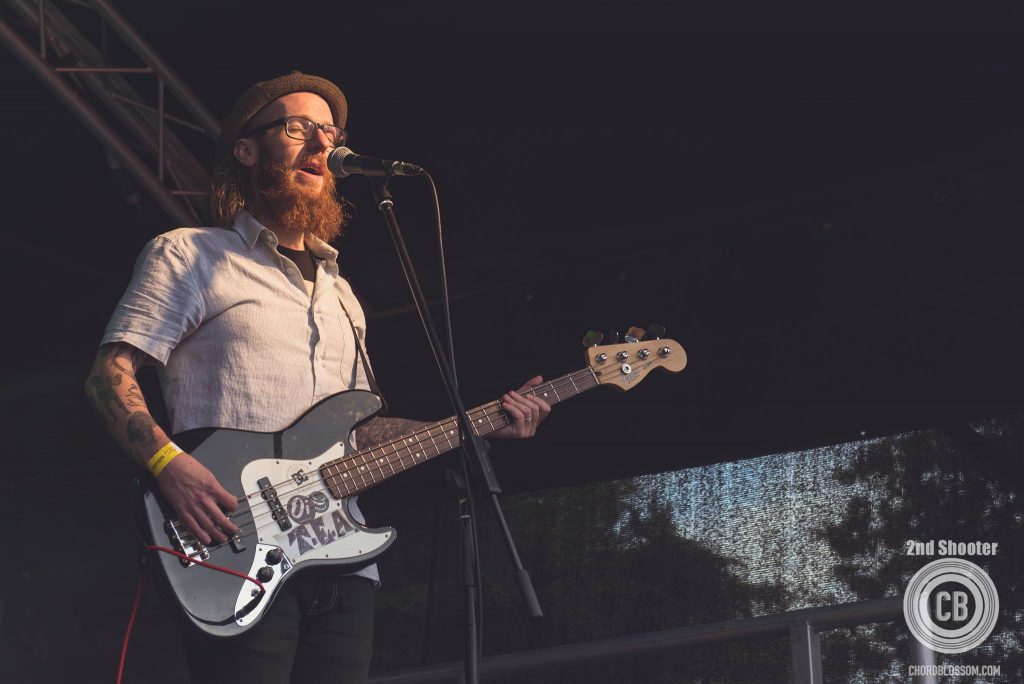 It’s Flyte’s first time playing in Northern Ireland and they rock pattern shirts and evoke English indie rock. Seeing us all in our raincoats, frontman claims, “Looks like the Irish know how to prepare for shit weather!”. They play ‘Orphans of the Storm’, about the frontman’s passed Granddad, and adding reverb to make it “sound like we’re lost at sea”. They cover ‘Archie’ by Alvvays a capella and it makes such a statement someone calls out “You should play all your songs like that!”.

Ryan Vail takes the Lights stage and the stunning visuals work really well in the small dark space. Ryan says, “I noticed there aren’t many electronic acts, I feel like a minority but you’re all here!”. The smoke and lights are powerful and people are starting to get on the drink because everyone is dancing and stood up. Vail encourages dancing and makes us work for the last song. The lights are blinding and the visuals ever creative.

It’s dark now and time for a headliner, and Eliza and The Bear know just how to do it. They are a big presence with every member of the band giving it stacks. An indie rock band from London, you may have heard their recent single ‘Higher’. The Flaming Lips are a massive influence. The lead singer, James, suffers from arthritis and playing music is apparently the only thing that relieves his pain. They’re upbeat songs that will make you want to party – be careful not to slip in the mud though! Jubilant vocals are suggestive of Chris Martin. They play, ‘Kids in Love’ and everyone has their hands up. The main stage area is packed out and everyone is dancing. What a way to end. 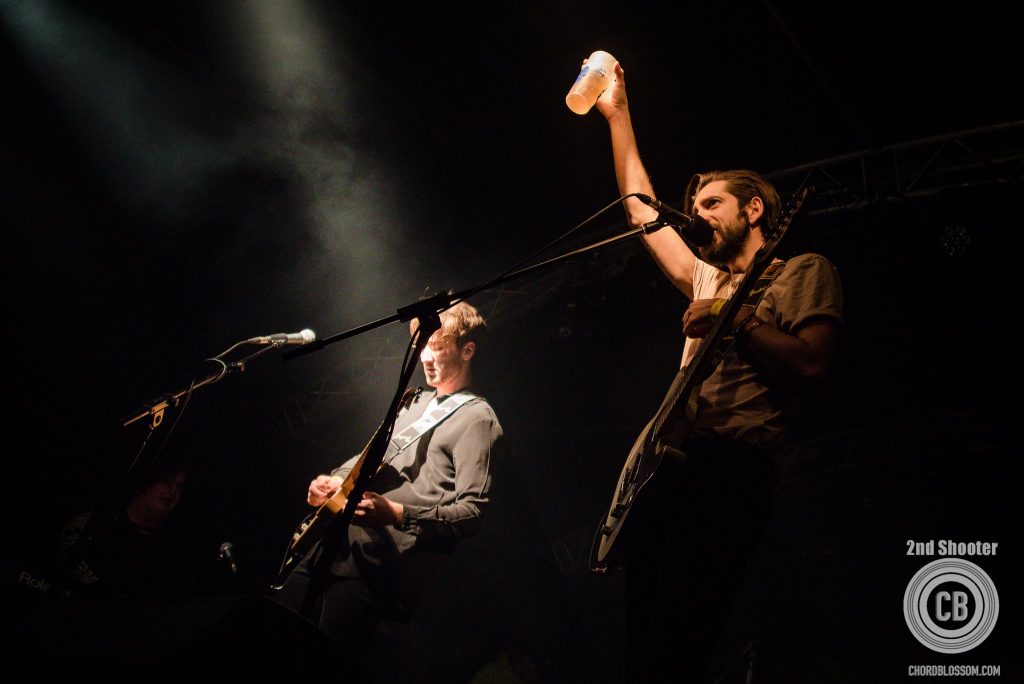 Eliza and the Bear – Photo by 2nd Shooter