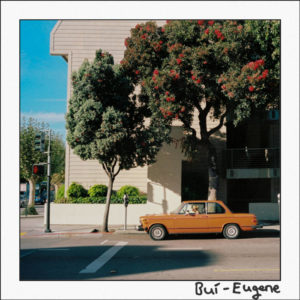 Earnest, scuzzy low-fi interspersed with spacious acoustic ballads, tied together by broad Belfast vocals. All this and more is to be found on Eugene, the debut album from singer-songwriter Josh Healy’s latest project, Buí.

Healey is joined by close friends and home-grown talent on this record, with appearances from Eoin Johnson, Rónán McQuillan and Adam Sloan of Healy’s previous venture Josh the Human. The varied, eclectic nature of this album perhaps reflects the time-span over which it was conceived, representing a partial anthology of four years of Healy’s song writing. The charm of Eugene undoubtedly lies in the honest, stripped back simplicity of the songs.

The album opens with the riff-heavy, head-nodder, ‘People Don’t Think’.  With Healy’s melancholy lyrics juxtaposed by the upbeat tempo and driving synths, it’s a definitive earworm- it’s not hard to see why this was chosen as the album’s single. ‘Hello sun’, shows us a more introspective side, Healy’s distorted vocals rising over simple bass and guitar driven instrumentation. It’s evocative, conjuring the stale feeling of being inside your own head too long. The tension between such lyrical intimacy and the distant, distorted vocals make for an atmospheric, contemplative track.

The fall-out-boy-esque titled, ‘I’m Going Somewhere (But I’m Not Sure Where)’ delivers a gratifyingly mellowed pace, with bright guitar chords piercing the chugging acoustic rhythm. ‘Golden and Navy’ slows the pace right down and allows Buí to stretch their folk soaked strings, Healy’s lyrics sitting beautifully between stripped back acoustic guitars. Yet jut as you relax into this song, it’s abruptly cut short by the analogue drum machine intro of ‘When the Fun Stops’. Twitchy, electro synth riffs reminiscent of a beat-up Gameboy colour pierce through the track, driving it on until its culmination in a bright flugelhorn crescendo. The back-to-back paring of these two polar tracks encapsulates the twisting, contrasting nature of the album, it’s evident that Buí are not afraid to play across their full range of styles.

Tracks such as ‘Data’, showcase a more experimental, shoe-gaze inspired side of Buí, whereas, ‘I Think We Can Do Better Too’ acts as a firm indie-rock counterweight to the earlier gossamer ballads. The closing track ‘Ode to You’, descends from monotone vocals set over slow chugging guitars, into a wild cacophony of distortion and unwieldy piano. A hidden track appears at 7.15, a simple guitar-picked melody over Healy’s vocals telling us to ‘just let it go, you’ll feel brand new’. A catharsis that Eugene delivers.

Touching on themes of longing, anomie and hope, this record is at its best emotional and sincere. The varied, at times incongruous mix of tracks on Eugene leaves Buí with space to play with their sound, I’d keep my ears peeled if I was you.

Countdown is on to Output 2022