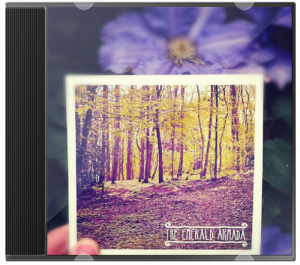 When a potential (and, perhaps, unenlightened) listener, solely ‘acoustic’ music might seem like a moody, mellow and perhaps slow genre that, unless in the mood for, doesn’t make great mainstream listening. This is a misguided interpretation, and all it takes to prove it wrong is one artist to show that this isn’t the case. Enter acoustic quartet The Emerald Armada. They’re making some noise in the industry (and not just in a musical way), and from the quality of these three tracks, entitled Strangers, Everyone and I Don’t Mind, it looks like they’re going to end up in a great place.

From this record, its plan to see that The Emerald Armada clearly have a knack for producing great, catchy and talented acoustic music, which can easily put the preconceptions of the genre straight to bed. It’s not folk, it’s not rock, and it’s not even indie. It’s just catchy. In fact, it’s not only catchy, but its acoustic music that manages to kick up a great ‘party-esque’ atmosphere, almost effortlessly. It has a great, overarching ‘sprightly’ feel to it, a cheerful, spirited sounding take on the acoustic genre that makes it an appealing record to any casual listener.

Title track I Don’t Mind showcases this upbeat aspect of the music perfectly, with quick paced acoustic guitars and funky-orientated bass-lines that complement some excellent vocal work from the Irish lads. There’s an excellent use of both maracas and flute on Strangers, which ordinarily would pre-mediate a slower, more mellow song, but that knack that The Emerald Armada have of producing upbeat songs without even thinking about it kicks straight in again, and it’s another enjoyable listen.

Issues? Not really that many. Three tracks aren’t enough to give any sort of criticism, because they might be issues that are solved in other tracks, released on an EP or an album. The only real criticism to make is that the tracks should be part of an actual record, put together to form something tangible that’s more memorable to a listener. That’s not an issue with the music though, and clearly something that the band are working on. That goes without saying. Musically, all that’s left for this reviewer to say is carry on.

So, a talented and almost issue-less release. It’s a great set of tracks, excellently written, recorded, mixed and performed, with enough of a unique twist on it to make it memorable, and familiar sounding enough to make it appealing to a new audience. That takes immense musical talent, so it’s clear that The Emerald Armada have that in spade. Plus, if these tracks are anything to go by, The Emerald Armada are set to be a huge musical force to be reckoned with within the next year or so. Look out for them.