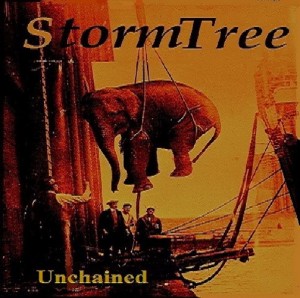 Right off the bat I am declaring an interest. I have known Belfast’s  StormTree for some years, and so some of the songs on this album were not new to me. Also, bass-player, Billy Causby, is an erstwhile bandmate – a very talented bass-player who has done everything from Glam Slam to Henry Cluney’s backing band, but without, until now that is, having much to show for it in terms of recorded work. And, having recovered well from the career low point of being in a band with me, I naturally wanted the best for him, and for his new band-mates.

BUT, I can tell you now, if I don’t like something, I am totally prepared to say that, even to the face of whoever is involved. That’s just how I am and, having been on the other side of the fence, I can tell you the only thing worse than getting a bad comment is being patronised. Therefore, I’d rather tell the ugly truth than spouting empty platitudes. Nevertheless, despite knowing some of the songs, despite (or maybe because) I knew John Guilar (vocals/guitar) as well as Billy, I was still nervous about this assignment, but on the flipside I didn’t want anyone else getting it either. Hey, I never said I made sense.

I needn’t have worried. ‘Unchained’ is a triumph of style and substance. The style I mention is classed by the band itself as Rock n Roots, which is pretty spot on. Celtic Rock would also encapsulate a lot of what StormTree are about. Guilar provides the rock guitars, Causby the driving bass lines (and some beautiful descant harmony backing vox), Gerry Lisk (now left the band) provides the drums to complete the Rock part of the equation. The Celtic part of the equation is provided by the immensely talented Mickey Conlon (violin, piano, backing vox) and Connor McCabe (banjo & whistle). They are not some afterthought to the sound to give the band some sort of crossover appeal – Conlon’s stunning violin work is absolutely key to StormTree, tending to fill in the spaces where a straight-ahead Rock band would have a lead guitar. You don’t miss that six string at all and songs like ‘Straussian American’, ‘Johnny’ and the wondrous instrumental ‘Black Mountain’ wouldn’t be the same without his work. Love it.

The substance I speak of are the songs themselves. There isn’t a weak song on the album, there is always a well thought out lyric, an interesting story or a melody line that hooks you in and leaves you singing it long afterwards. Guilar must take the credit here as the main song-writer. There is conviction in his voice, be it the beautifully sweet vocals (Jim Kerr – Simple Minds, sprung to mind) on the wonderful ‘Paradise’ or the more raucous, American-ised bluesy growl of ‘Liquor Store’ or ‘Broken Glass’. Nor is Guilar averse to taking the odd stylistic risk in terms of aspects of his vocal delivery and, even if they don’t always work, it is better than being a ‘safe’ singer – it gives the songs an edge and it comes from him trying to convey what he is singing about. There are elements of classical folk-style lyricism in some of the lyrics but some classy everyman lyric writing – none finer than on ‘Burning Skin’.

Sell music on itunes at ReverbNation.com

I don’t know what thought comes into your head when you hear the words ‘Celtic Rock’, maybe it has you running for the hills, maybe it has you thinking ‘aul bloke’s music’ like Horslips or Jethro Tull. And yes, there are echoes of both there. But StormTree also bring to mind the likes of The Waterboys or even classic Dexy’s Midnight Runners in songs like the beautiful ‘Springfield Avenue’ and working class diary entry ‘Castle Street’ and there is plenty of muscle in there for rock fans ‘Broken Glass’ (Celtic Rock version of the Ace of Spades riff), ‘Ride On’ and some funky influences on ‘Look To The Sun’. My favourite track, just sneaking in ahead of ‘Paradise’, is the title track itself – a wonderfully uptempo feel good tune built on Causby’s insistent bass line and with Guilar’s voice is at its most enticing.

But that’s only my favourite. There’s a bit on here for fans of many genres, all melded together to form a really, really enjoyable album.

Is it perfect? No, I won’t tell a lie just for the sake of friendship. While, on the whole, the album is excellently produced and engineered by the legendary Frankie McClay (Einstein Studios) – its deliberately live feel does require the ear to gloss over the odd clumsy moment especially in songs like ‘Ride On’ that have a few timing changes. I don’t blame anyone for this, nor does it spoil my enjoyment. Any recording project is a compromise between getting it as close to perfection as the amount of money you can spare will allow. If you eschew the worst excesses of Pro-tools to get an authentic live sound, you cannot expect metronome-like perfection in every drumbeat and fill. You only get that by breaking songs down into artificial pieces. That wouldn’t suit a band as organic as StormTree. And, as I said, the production values at times are outstanding; with McClay getting the violin mix especially spot on, giving it the limelight it deserves. It’s a brilliant effort all round.

This is the second, very different, local album I’ve been given in recent weeks that has blown me away by the quality of song-writing and the conviction both bands have to their music. It should be rewarded by sales. But that’s in your power not mine.

The official launch gig for the album is at the Black Box, Belfast on June 18th. I can tell you the band are as good live as they are in the studio, with a great band rapport and sense of fun.

Get along. Get Unchained.