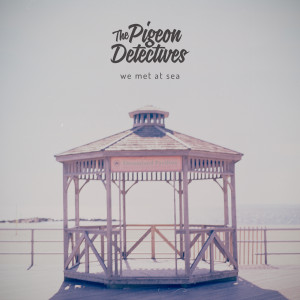 The Pigeon Detectives are releasing their fourth album to date ‘We met at Sea’ in April and it would seem the lad’s from Leeds have done a hell of a lot of growing up since their 2007 debut album ‘Wait for me’. The boys have traded their indie pop signature sound for a much more mature plugged in experience, though loyal Pigeon Detectives’ fans have no need to worry Matt Bowman’s vocals still give it that distinguished stamp that sets them apart from their peers. The ten track album is a journey telling stories of break ups to make ups, having a good old time and giving life the middle finger while doing so.

The album’s opener, new single ‘Animal’ is a great way to kick off the new grown up sound the guys have crafted throughout the album; the energy filled track is bursting with heavy bass-lines and a lot of catchy riffs that will have you digging out your dancing shoes for a night on the tiles. Many of the songs are upbeat and carry a – dare we say a disco vibe throughout, combined with Matt’s unique vocals it all comes together extremely well as a new sound for the Pigeon Detectives.

‘I Won’t Come Back’ and ‘Light Me Up’ would fit the profile as anthems for a chaotic night on the town whilst ‘Hold your Gaze’ may get the title of the nations new favourite break up song, making you feel altogether that life’s really not that bad after all. ‘You Can’t Find Me’ and ‘I Don’t Mind’ aren’t worlds away from what Pigeon detective fans are used to hearing, these could possibly be the fans new favourites. The final track on the album ‘Where Are You’ is an upbeat dance track and is the perfect way to celebrate the new sound the band has undertaken.

Pigeon Detectives fans will not be disappointed. The new grown up sound is a step in the right direction for the band, given that the band and their fans will have done a lot of growing up since 2007.