Snow Patrol fans were promised “it was only a matter of time,” by lead singer Gary Lightbody and that time has bee confirmed as Saturday May 25th 2019… the date the band return to Ward Park, Bangor, 9 years after their last record breaking gig there where they played to a 45,000 strong crowd.

Announcing Ward Park 3 at Oh Yeah Music Centre, Lightbody spoke with pride of the love and support of the Northern Irish fans of both Snow Patrol and the local music scene. “Northern Irish music at the moment is in its rudest health. It’s very exciting to be able to celebrate that at a time that when it’s a good time to celebrate all the good things about Northern Ireland,” Gary Lightbody said adding, “Whenever I am in Bangor I am always asked ‘when’s the next Ward Park? Now I can say, May 25th.”

Speaking about his memories of the last Ward Park gig, Gary said: “The day was kind of nerve-wracking for us, during the day hoping everything would go right and everything just kept going smoother and smoother and smoother. Then we are standing at the side of the stage waiting to go on to a sea of people and at that point I thought; We have done it, it is going to be a good one. When we got on stage it blew my mind, the reception was extraordinary.”

With 7 years having passed since the last studio album, Snow Patrol released Wildness in 2018 thankfully seeing an end to Gary’s crippling writers block. Speaking of the nerves and anticipation of the release, he said, “We were not expecting people to stick around for as long as they did, we did not think it would take seven years to make an album, that is on me, I could figure out a way to write the lyrics, I hold my hands up to that. We were not expecting the same interest as before, for the album and tour to do so well. You can’t expect that, to leave it that long especially now when people’s attention spans are getting shorter and shorter, myself included, it is harder to keep that loyalty. But people seem to have with us and we are very grateful for it and it’s not something we take for granted.”

The hat-trick one-day event will see Snow Patrol being supported by the finest of Northern Irish bands, including: Foy Vance, Ash, SOAK, Jealous of the Birds and Brand New Friend on the main stage. There will be a second stage curated by Snow Patrol and Gary Lightbody’s NI artist development company, Third Bar, with fresh new artists including JC Stewart, The Wood Burning Savages, Kitt Philippa and fresh from supporting the band on their UK tour, ROE showcasing the bright future of the Northern Irish music. 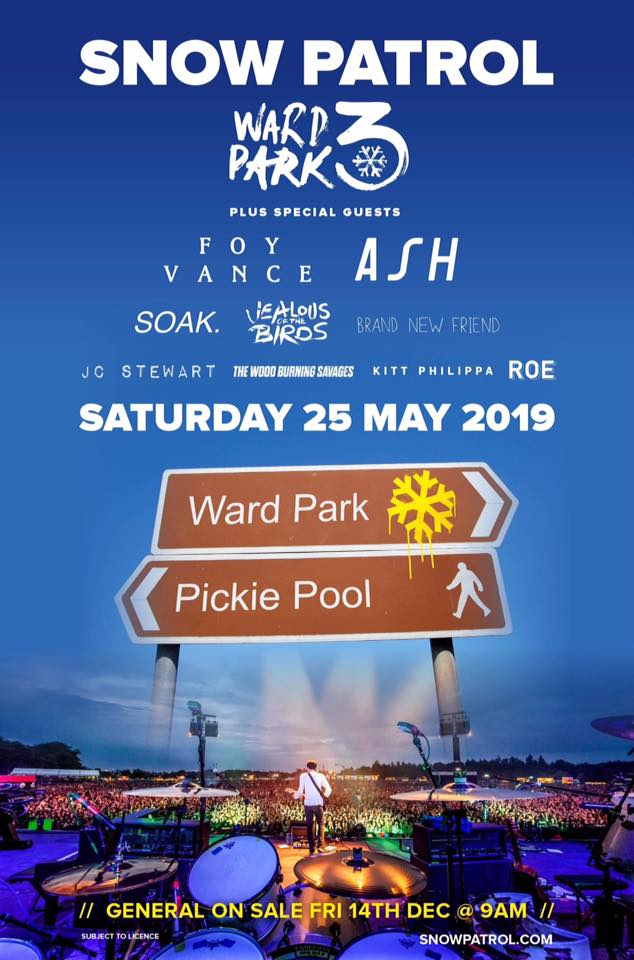