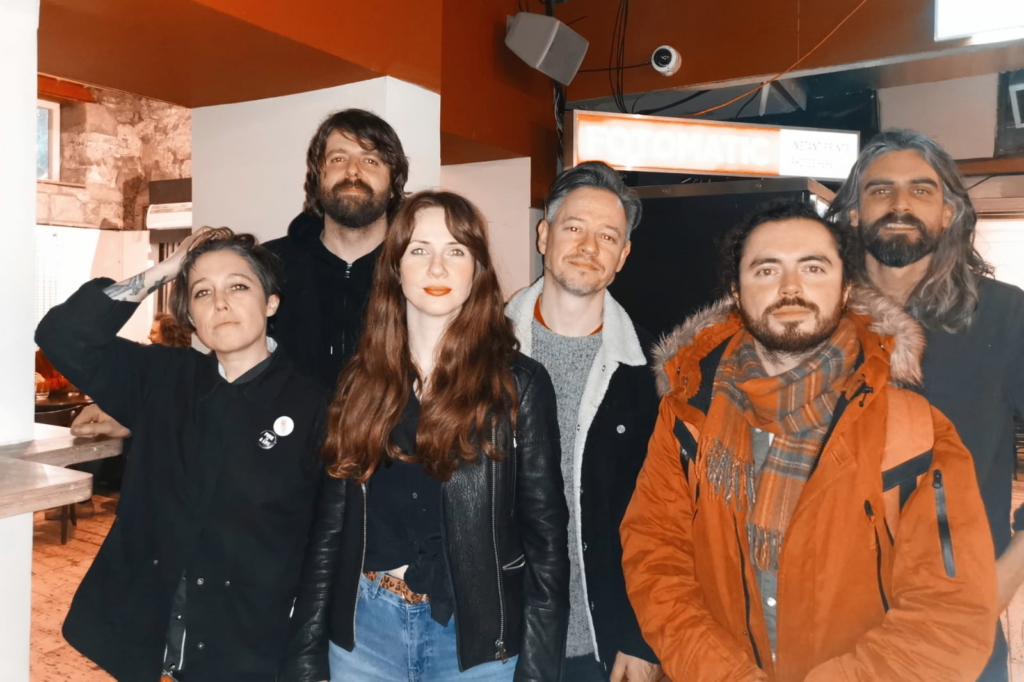 In early March, a time before the current lockdown, one of New Pagans headed out on their first UK tour. Taking in dates from Glasgow to London, the band brought their darkened alt rock to new crowds as they released debut EP Glacial Erratic.

We asked the band to recount their experiences through this visual tour diary from food hunts to sweaty venues and Travelodge carparks.

Starting out and collecting gear in Liverpool from our good friend Dougie. We weren’t sure if everything would fit into the van but we made it work, just about.

Day one of tour is always a bit stressful, working out the kinks in the gear, packing the van and setting everything up for the first time. Conor suggested we stop in a lovely town called Knutsford for some lunch before we hit Nottingham. It turned out to be a very good idea, keeping all that hangry at bay.

Playing at Rough Trade was a great way to start the tour. We had a tough soundcheck but the gig was great, a small venue, a good crowd and so much dancing. Absolutely no photos of the show though but sometimes that’s a good sign. We even got our vinyl into the Rough Trade shop thanks to Conor and his sweet talking.

Here’s Davey who put us on in Glasgow, he was so good to us. Thank you!!! We caught up with old friends and enjoyed a good sweaty punk rock gig. The support bands were AMAZING, Kilgour and Gunke, this gig was one of the highlights of the tour for sure.

Leaving Scotland, having discussions about what makes a mountain a mountain, apparently, it’s more ambiguous than you might think.

Tour tip for coffee lovers: bring your own coffee and maker if you can, it brightens up the morning and you don’t have to spend the rest of the day being a grump and searching in vain. Definitely bring something along that makes you happy. Lyndsey brought her own tiny coffee cup. Habitual activity connects you to home.

Conor told us he was going to be happy for the rest of the tour in this Travelodge carpark, he’d had a dream about it. Cahir’s response, “impossible”.

We spotted Buddha in the Travelodge carpark, Conor thought it was a good omen as we set out on a whole day of travelling.

Claire building her empire and the guys waiting patiently for Cahir to get a haircut before load in. The barber did a great job although we have no photo evidence of this.

Allan hanging out before soundcheck, fact checking as always. Thanks to Gordon Armstrong for coming down and capturing the Newcastle gig for us, we loved all the shots he got.

Claire made the EP artwork and together with our designer Daniel McCloskey they produced this beauty. Sometimes we feel like we’re in the wrong body, in the wrong place, at the wrong time, Glacial Erratic is dedicated to anyone who has ever felt like that.

The lads waiting to load in.

Allan waiting patiently for the toilet, probably. That’s John McGurgan in the background, our soundman. We believe that one of the most important parts of playing live is making sure the quality of the sound for the audience is at its best, John nailed it every night. Thanks John!!!

We lost Conor for a couple of hours after the gig but he couldn’t wait to get a McDonalds (eat gluten), so he came back pretty swiftly, like a boomerang.

A poster we liked in the Peer Hat, Lyndsey has promised to try and fit this into ‘Charlie has the face of a saint’ from here on out.

London is a melt.

In search of food, again.

We took shelter in a really delicious Italian restaurant for lunch, and everyone was happy in London after all. The show went great, we got to meet the PR team we are working with in London and they’re absolute gems. We also got to hang out with Lyndsey’s friends Riona and Stuart, sometimes it’s good to inject new energy into the mix.

We strolled around Bristol looking for a Sunday roast for a very long time but everywhere was full but at least we got to see how pretty the city was.

Cahir falling in love. We’re still looking for that roast….

Last day of tour, excited to get home and cook for ourselves but also a bit sad to be ending this so soon. It probably seems like we spent the whole tour looking for food and in a way that is true, food is very important. One week is all we could carve out for now but maybe next time we’ll make it two.

Tour was great, it’s hard work but it’s always a privilege to play our music live and meet new people. Thanks to all the promotors, venues, bands that supported us and everyone who came out to hear us. We realise we are so lucky we got the chance to travel about freely, a week later and we were all self-isolating. We’re now entering a really difficult period for musicians and the music industry and more than ever it’s important for us all to look out for each other, check in and offer help when we can. Hopefully all this self-isolating will give us the opportunity to finish our album and get it out to you soon, a little bit of silver glitter sprinkled on all this mayhem.

Photos by Claire and Lyndsey, except when otherwise indicated.