This week sees a great mixture of local and international acts gracing our venues, in particular I am really looking forward to catching Biffy Clyro on their return to Belfast, there is also Simple Minds, Gacy’s Threads and the return of the Menagerie’s local music showcase featuring HOWL. Unfortunately none of them made my actual list this week but it’s going to be a busy week!

Johnny Marr – Limelight – Tuesday 26th March 2013
Excitement was high when former Smiths’ guitarist Johnny Marr announced he would be releasing his debut solo album. Having played in the Smiths,  Modest Mouse and the Cribs, he has a wealth of experience. Interest in the show has been very high and it would be wise to seek out a ticket sooner rather than later!

Tickets available on the door or from Ticketmaster for £22.

Transmit: Seven Summits, Havana House Party & The Late Twos – Limelight – Wednesday 27th March 2013
Our friends at Transmit are at it again with another great line-up of local talent. Seven Summits return to the Limelight for what will be their last gig with Ciaran McKenna as he departs for new shores. The supports aren’t bad either with Havana House Party being one of my personal tips for future success and of course the ever reliable Late Twos.

Tickets are available for £3 on the door!

Axis Of – The Empire – Saturday 30th March 2013
Having just released their debut album and received some nice critical acclaim from the likes of Kerrang, our north coaster rockers, Axis Of play their album launch show at the Empire. This is another show that is likely to sell out and is complimented by the addition of Pocket Billiards, The 1930’s and Pigs As People to the bill. Don’t miss out on seeing the lads in such an intimate venue it could very well be your last chance as big things definitely beckon them.

Advance Tickets on Sale in Empire: £6 (Which gets you album half price) Or they are available on the door for £7

Special Mention:
On Saturday if you are about during the day you should check out Volume Control’s family friendly gig. From 3PM The Wonder Villains, 20 Second Century and Ryan McCann will be performing live. Even better admission is completely FREE so why not go down for a few hours and check out some great local music. 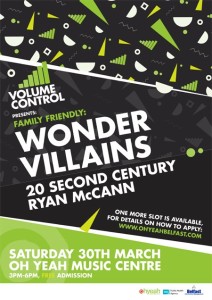