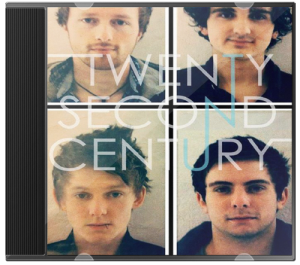 20 Second Century, a punk-rock four piece hailing from Co. Down, are playing a dangerous game. Punk rock isn’t exactly on the rise, it could be argued that it’s a tired and overused genre, and should be consigned to the depths of history along with so many other past genres. That’s not stopped them releasing this, their latest EP, which is a definite attempt to revive the style and create something new out of it.

It’s an emotive sounding release, which gives it a slight edge over other punk music. It’s more heartfelt, with a definite passionate twinge lingering throughout the vocals, which are nicely placed in among the music (not too prominent, but not too lost in the sound either). Musically, it has a great sounding distorted, punky sort of crunch sound on the guitars, which complement half-sang-half-chanted vocals, a style made famous by punk bands such as Sum 41 (Still Waiting) and Blink 182 (Feeling This). The differences come in the pleasant lack of an over-accentuated American accent, which, whilst unavoidable, does become tedious in the aforementioned older punk style. The other pleasant and slightly different aspect is the ‘bassy’ quality the music has. That makes it slightly different, giving it an almost ‘electronic’ vibe, alongside the punk style. It’s a specific area to focus on when praising this album, especially when it has so much to offer, but it’s something that really stuck out all the way through that this reviewer kept noticing.

Areas to improve – the EP could be slightly longer, four tracks, whilst usually long enough for an EP, especially a debut one, isn’t long enough to showcase music of this style properly. It just doesn’t have the time to show off the vast amount of talent that 20 Second Century obviously possess. It’s just enough to whet the appetite of the listener, enough to make them think “wow, I really like this”, and then it’s over. The vocals could be placed slightly more prominently over the music as well. They sit well as they are, as mentioned before, but it might be good to have them slightly more in the foreground, to give the impression of the importance of them. There’s no point having that amount of emotion and passion within the vocals, and then not making them stand out.

So, it’s very clear to see from 20 Second Century’s EP that the energetic, jumpy sounds of punk aren’t quite dead yet, despite the eras of New Found Glory, Sum 41, Blink 182 and others arguably fading into the distant past. This reviewer thinks that a revival is perfect. The tired old style still has some gusto left in it, and 20 Second Century have put a twist on it that refreshes it and makes it interesting again. – Wonderful stuff.