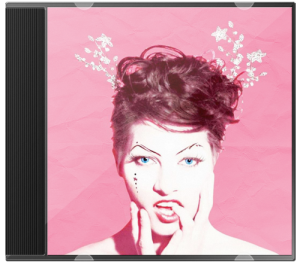 Welcome to the disturbing, slightly manic funfair, horror show of Amanda Palmer’s latest album. Unless you are bilingual you may be as stumped as me with regards to the introduction… and then we move onto track 1; Smile. I was far from doing this at the onset. First impressions of the discorded harmonies overlapping eachother to create a chaotic and dramatic plea instantly incline me to think this is going to be a rather dark and morbid soundtrack of manic depression. Continuing on, some major key changes begin to produce some small undercurrent of hope, and just about keep your head above the murky depths of head banging grunge. If it didn’t force you to listen for an extra 3 minutes than necessary I’m sure I would point blank dislike this but lo and behold, my head was doing that stereotypical rock n roll nod.

After seeing that there were 14 more tracks to go, I won’t lie, I nearly cried. But hold the phone Palmer fans; don’t cast me out just yet… I listened on. Immediately skeptical at the song title ‘The Killing Type’ I was pleasantly surprised to say the least. The complete antithesis to its predecessor with its super plucky guitar combined with an 80’s type synth in the background makes for a fantastically catchy sound. Palmer’s retro vocal make this a rather cool tune.

“Do you wanna dance, do you wanna fight, do you wanna get drunk and stay the night?” Well yes Amanda I will if this is the soundtrack. If you were to put all the instruments you could find that make as much noise as possible and two eccentric vocalists, one male, one female and put them in a blender your ears would be blessed with the sound of this feel good punk rock sound. Somehow Palmer’s voice manages to deliver order amongst the chaos of dramatic background instrumentals. This is for sure a major theme throughout the album.

As I continue my way through this incredibly dynamic album I am continuously surprised. The more I listen, the more the unique sound draws me in. I find myself listening as much to her story as much as I am to the vast array of instruments, sound and rhythm. Both ‘Grown Man Cry’ and ‘Trout Heart Replica’ seem to invite you in to the very depths of Amanda’s soul. It is here you can truly appreciate her fantastic lyricism. The latter of the two is a soul-bearing ballad complete with evocative violinists and a talented foray of piano keys. You are utterly consumed by a haunting orchestra of sound. This needs to be the soundtrack to the next blockbuster. It has devoured 7 minutes of my life and I haven’t even realized.

There are regressions every now and again to the punk cabaret Palmer is so well known for. Introductions and Intermissions serve only to highlight the theatrical quality of her personality. Cue fanfares, roll out the marching band and spray the confetti…all very dramatic. These 2 minute interludes are sandwiched between perhaps the most commercially accepting tracks of the album. ‘Lost’ is a much more funky, upbeat tune, with terrific drumming and jazzy bass lines. Although still an extremely powerful and confident sound it propels itself forward with such force and certainty, Palmer leaves no ambiguity with the strength of her voice. Thank the band gods she found instrumentalists who were not only able to keep up with her unique tone but compliment it.

Move over Fleetwood Mac (bet you didn’t think I’d be saying this at the start of this review). ‘Bottomfeeder’ is the track that would make me happily remain shipwrecked on a desert island with only a football as a friend. It totally engulfs every ounce of stress and transcends you to a truly harmonious state of mind. Palmer’s voice, married to the strung out synth and borderline electronic undercurrent is a match made in heaven. 6 minutes and 13 seconds just isn’t long enough.

Ok I feel I could write a page about each song, but I will mention only one more stand out track. Amidst a lot of grunge, punk, cabaret rock there lies, ‘The Bed Song’. What a delightfully innocent, angelic lullaby come nursery rhyme. Gather round, Amanda Palmer will tell you a story. However in true Palmer style, the lyrics versus the sound are a huge irony. The tinkling piano masks her satirical and brutally realistic take on the world. “You take the heart failure, I’ll take the cancer…” Massively melancholic, the story is sugar-coated with a playful child-like melody to entwine the two contrasting scopes together. All in all it feels like an achievement getting through this album. It takes you on a journey into the dark crevices of Palmer’s mind as well as music itself. I feel like I have listened to every instrument, sound, tone, and rhythm combination I can think of. There is clearly no limit to this woman’s talent. She won over a skeptic. That’s praise enough.