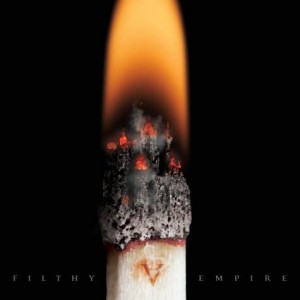 British rockers Heaven’s Basement are, essentially, a proper, old-fashioned rock ‘n’ roll band. Heavily influenced by other like-minded bands as such as Buckcherry, Bon Jovi, Guns ‘N’ Roses and Black Stone Cherry, and a touring schedule that is exhausting just to read, Heaven’s Basement encompass everything that is good – nay, great – about the rock genre.  ‘Filthy Empire’ is their debut full length album, which follows two precious EP releases since their formation in 2009.

The album opens with the riff-tastic ‘Welcome Home’, and immediately introduces us to what Heaven’s Basement are all about. With its glorious ‘Eighties-rock-with-a-twist’ sound, singer Aaron Buchanan’s rebellious rock vocals, and an anthemic chorus, it’s quite an introduction!

In fact the entire album is full of stadium-sized choruses, crunchy, wailing guitars and driving beats, with Buchanan’s vocals tying it all together beautifully. It is an ambitious twelve tracks long, with easily relatable themes such as love and loss, outsiders uniting, and defiance against ‘the man’. Their influences are clear throughout: whether it’s Bon Jovi (in the ‘Livin’ On a Prayer’-esque ‘Fire, Fire’), Buckcherry (‘Heartbreaking Son Of a Bitch’ sounds rather like ‘Crazy Bitch’), or Seventies southern rock such as Lynyrd Skynard (on tracks such as ‘Jump Back’ and ‘Executioners Day’), but always the intent is more ‘fond homage’ than ‘pisstake’ or ‘blatant rip-off’. It’s a joy to listen to, frankly.

There are several standout tracks; two in particular. The first is lead single ‘Fire, Fire’, with its fabulous, dirty, southern rock-tinged chugging riff, huge chorus and raw vocals. The other, interestingly, is the flip-side; the beautifully melancholy ballad ‘The Price We Pay’. Both these tracks showcase both the bands and Buchanan’s versatility, as ‘The Price We Pay’ is an acoustic, piano-driven number (the antithesis of the, ahem, fiery ‘Fire, Fire’). Don’t be surprised if it brings a tear to your eye!

The driving riff and rhythm of ‘Executioners Day’ is a more than apt conclusion to this album; one can imagine a Heaven’s Basement gig ending with the magnificent flourish at the end of the song, and the crowd going home feeling happy and spent, their classic rock craving amply satisfied. As will yours, dear listener.

So, if you ever come across one of those purse-lipped miserable folk who claim that rock ‘n’ roll is dead (and don’t you just hate those guys?), do them a favour and stick this album on for them. This is THAT album. The one that will prove them wrong. It’s that good.