We are pleased to announce that our highly anticipated competition for local bands and musicians across Northern Ireland is returning for 2017. As usual, we will be offering the eventual winner of the competition, the opportunity to “kickstart” their year with an impressive package of prizes including a single recording, music video and festival slot up for grabs.

For 2017, we are pleased to be partnering with Help Musicians NI to launch the competition. Help Musicians UK is the leading UK charity for professional musicians and offer support and advice to musicians at different stages of their careers. They launched themselves in Northern Ireland last year and we feel that their expertise will be of a real benefit to the musicians taking part in Kickstart.

Our winners from last year, Brand New Friend, went on to have an incredibly successful year with their music being played on Radio One and BBC 6 Music, their debut EP receiving critical acclaim and obtaining a number of significant support slots throughout the year. Other notable winners of the competition include SOAK and In An Instant. 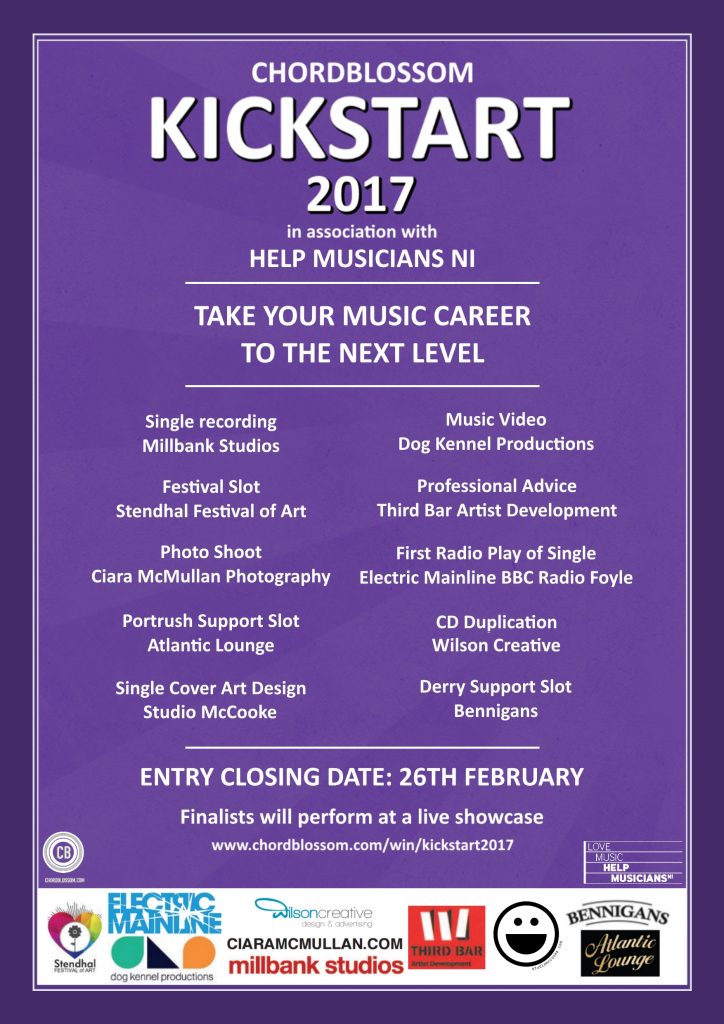 ►  Video for your Single – Courtesy of Dog Kennel Productions

► First Play of your Single – Courtesy of Electric Mainline

You must be a musician or band originally from Northern Ireland and have not released a full length album. If you meet this criteria please send an email to kickstart@chordblossom.com with the following information:

– I have entered the competition before, am I still eligible to enter this year?

Yes, as long as you meet the normal criteria. However, please send through a different song.

– Is there a restriction on the genre of music for Kickstart?

No, we welcome applications from musicians and bands of any genre.

– I don’t have a studio quality recording, can I still enter?

Yes, we aren’t looking for the most polished of singles. We will listen to all tracks and demos that are sent in.

– Can I send through a link to my music on Spotify/Youtube/Soundcloud/Bandcamp or WAV file rather than an MP3?

No. We are only able to accept an MP3 version of your track. If you have a file in a different format, please convert it using software available like media.io.

– Do I/we have to be available to play the showcase gig?

Yes, the showcase gig is a vital part of the competition. The showcase will be at a venue in Belfast and will take place on Saturday 1st April 2017. Full details will be announced in due course.

– Who will judge the different stages of the competition?

For the initial shortlist of twenty, the decision will be taken by the Chordblossom team of contributors.

For the final four, a panel of people who work in the music industry here will take a decision. Previously this has included local promoters, journalists and other industry professionals.

– I have a question that you haven’t answered, what should I do?

If you have any other questions, please send an email to kickstart@chordblossom.com and we will get back to you as soon as we can.

A Musical Celebration Of Stevie Martin