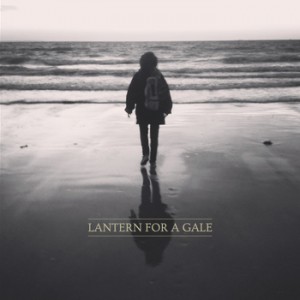 As I studied the words ‘Lantern For A Gale – From Adversity’ at the top of my empty page, two things struck me. First was the fact that Lantern For A Gale is an intriguing and unusual name for a hardcore band; secondly was the fact that the album title From Adversity conjured up numerous earnest hardcore cliches. Little did I think at the time that these two thoughts would coalesce to pretty much write my review for me, presenting a band who very much plough a well-worn furrow, but do so with a surprising amount of flair and who are well on their way to making their own stamp on so-very-established-by-now hardcore tropes.

Opener ‘Into The Fray’ – a title suggesting a headfirst, riff-led opener – surprises with a more measured approach than the listener might expect; rather than rushing headlong into an attention-grabbing cacophony, it sees the band collecting their breath – almost a sense of looking into the distance to survey the journey ahead – giving the first of many indications that the band are about the marathon, not the sprint. That said, the song still holds plenty of chugging riffs and propulsive drumbeats which strain at the seams of the song, it’s tenderly held together throughout by melodic, textured flourishes, making it difficult to view as a lead-track floor filler and suggesting an attempt to fashion more from the mid-paced chug.

‘Captain’ suggests more urgency, calling to mind the heavier aspects of Funeral For A Friend in its intro riff, and deviating from the guttural nature of the vocals with call-and-response vocal lines, before winding down into a snaking instrumental breakdown before taking things back up a few notches – though even at its fastest and hardest, the band pull it back before a classical-styled outro chant.

‘Perfect Things’ begins with a bluesy, guttural howl of “Let me tell you a story…” against swampy guitar riffs, a lone guitar line counterpointing the dirge, perfectly evoking a lone struggle under a gradually-increasing load. However, where an obvious chorus exists, its execution is a double-edged sword which will seem a) frustratingly low in the mix or b) entirely in keeping with the downward pull evoked by the song, and which interpretation is taken will depend entirely upon where the listener’s sympathy lies.

‘The Future’ pulls out another catchy intro riff, this time evoking Boysetsfire in both tone and lyrical content in “give me control of every last living soul”. Once again, the nucleus of a chorus is there, but it doesn’t seem as pronounced as it could be – and there’s the sense that Lantern For A Gale could be a much slicker band if they so chose, but that’s not what they’re about. Unfortunately, the beatdown riff in the final minute provides one of few moments on the album where a pace change doesn’t sound organic, and whilst it ultimately erupts into a standout Sabbath-style riff, it’s a save from a potential fudge rather than the complete victory it could have been.

‘Invocation’ provides a respite, its warm tones and elegiac keys succeeding in evoking imagery of a lighthouse searchlight – and of hope in a fog. It’s a breather for both listener and protagonist: as an album break, it works, but your enjoyment of it might well depend on which how intense you want your hardcore to be. That said, for its short duration it provides a good grasp of the band’s understanding of nuance and texture beyond the limited hardcore palette.

‘Shelter’ seems to falter off-kilter at the beginning to these ears, but redeems itself shortly after with a pleasingly gruff guitar line with chords evoking blue-collar punk which gets forcibly wed to a devastatingly simple staccato riff. It’s a song that sees the band at the peak of their texture and intensity, residual warmth perhaps carried over from the previous track. It’s a neat effect which combines well with the limited delivery of the intense vocals, and is a great indicator of where the band can go when their classical and more left-of-centre influences meet in the middle. ‘Love and War’ benefits by deviating from the chug, allowing some serpentine bass to peek through whilst displaying some hardcore punk fervour, before final track ‘From Adversity’s’ melding of portentous drumming and an almost post-rock restraint build to a driving, mid-paced riff in which the lyrics “..nothing left to fear from adversity”suggest an end-point; perhaps coming out of an experience weary, yet stronger having gone “toe to toe” with an enemy.

It’s effective, if again a somewhat standard motif for the hardcore genre, and over the course of a short, succinct album Lantern For A Gale do much to convince the receptive listener that they’re as interested in what they can do beyond the limits of their genre as they are in honouring its tenets. Whilst it’s not a stunner of an album, it’s an entertaining and interesting one – most notably when the band showcase their tendency towards fighting smart more than coming out swinging. They’ve proved they have the aggression down pat – personally, I’m more excited to see where their more left-field influences take them going forward.