[separator]Hi, I’m Michelle and I am a member of Volume Control. So far, my roles have been artist liaison, front of house, photography and helping to write press releases.

August has been a busy month for Volume Control as we were preparing for our recent gig in collaboration with Broken Melody Records. The event included energetic performances from Future Chaser, Wyldling, The Couth and Go Swim.

We held a competition for up and coming bands with the chance to play at our gig up for grabs. We were overwhelmed with the response we got which made choosing our winner quite difficult. As a group, we chose Go Swim as our winner!
[separator][soundcloud url=”http://api.soundcloud.com/tracks/98431267″ params=”” width=” 100%” height=”166″ iframe=”true” /]

[separator]
Future Chaser performed an impressive set with dark undertones which showed contrast from members Ryan and Kieran’s work in the Wonder Villains. The Couth had the crowd at the palm of their hands judging by the enthusiastic dancing from the crowd at the front! Go Swim proved that they were worthy winners, receiving a positive response from the crowd. See more pictures from the gig here: Broken Melody #001 Launch Party

The team were given the opportunity to appear on Arts Extra on BBC Radio Ulster! Three team members (Hannah, Freyja and I) spoke to host Steven Rainey about the work that Volume Control does for the music scene in Northern Ireland. We also announced Go Swim as our competition winners live on air!

We have already started planning our next gig. This time, it is a little different. Volume Control are organising an exciting new competition called ‘Clash of the New Breeds’ which hopes to provide a platform for up and coming bands aged between 14 and 24 years old. This is a great opportunity to get your music heard and showcase your talent whilst donating all its profits to local charity Northern Ireland Music Therapy Trust.[separator] 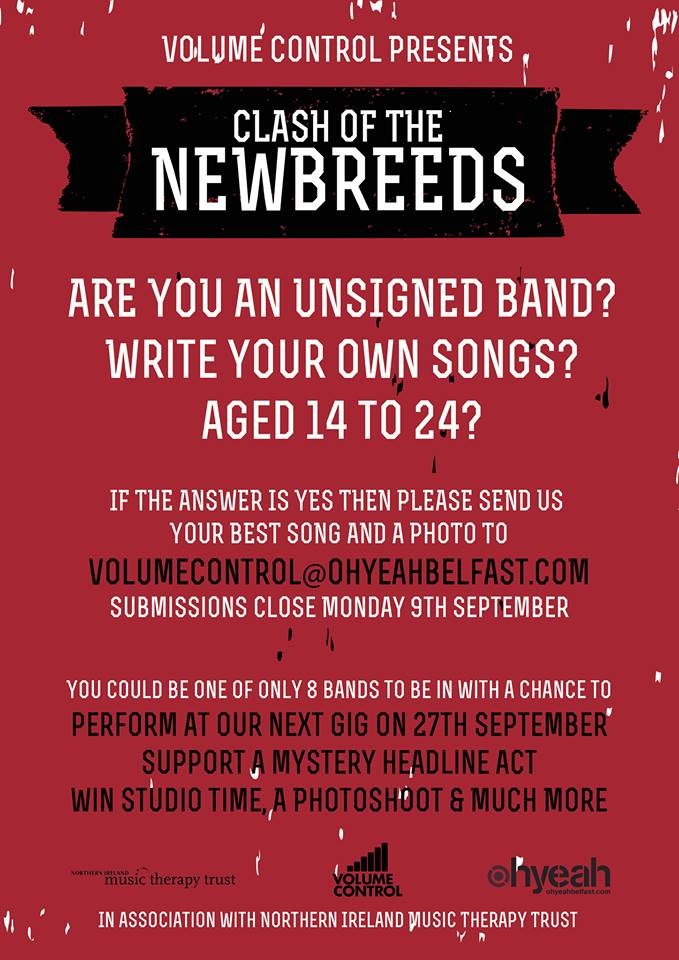 [separator]So if you are aged between 14 and 24 years old and you want to enter the competition then email one music track and a photograph of your band to: volumecontrolbelfast@gmail.com

We will be putting the votes out to the public to decide which 8 bands should get to the ‘Clash of the New Breeds’ stage. The 8 bands will get to support our mystery headline act! They will also have a chance to win studio time, a photoshoot and much more!

Entries must be received no later than Monday 9th September at 5pm.

On the night Volume Control will also be teaming up with some music industry professionals who will offer the selected bands advice and guidance on what next steps to take in their musical careers. They will also be providing their services as music judges for the event.

Volume Control want to give the entire audience on the night their say and vote for which band or artist they feel deserves to win. The criteria will be their sound, their stage presence and the crowd’s reaction.

The event will be held at the Oh Yeah Music Centre on Friday 27th September.

Look out for more information on how your band can enter by following us on Twitter by liking our Facebook page.

It’s hard to believe that we only have 4 events left as a team.  We are determined to make our forthcoming gigs a big success and go out with a bang![separator]