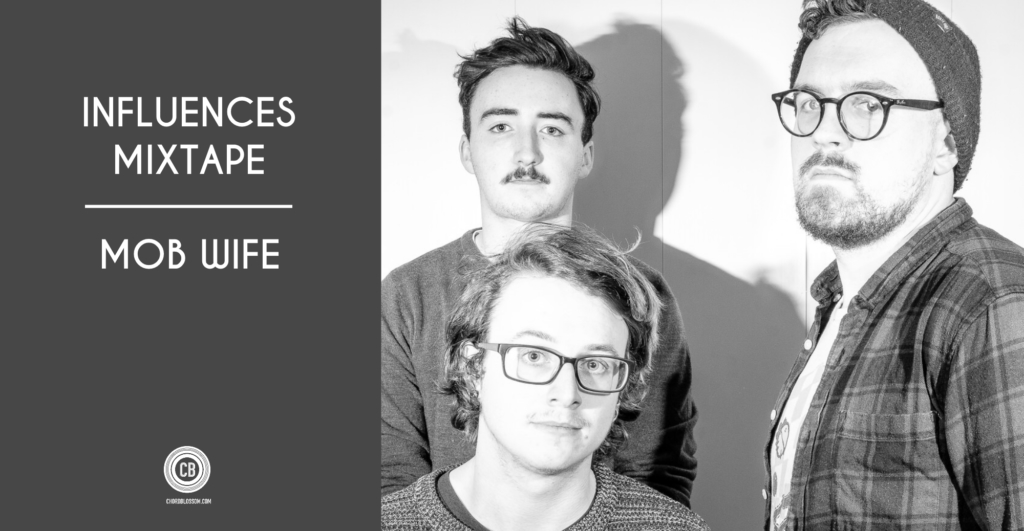 Last year’s debut ‘Warm Water’ was a head turning introduction to the three-piece, while follow up double ‘Captain Care/Hellsong’ brought an even more varied energy through intricate changes.

Mob Wife’s Chris Leckey talks us through the eclectic range of influences in their unmistakably punk sound.

God Only Knows – The Beach Boys
I think someone once asked me if I had a gun against my head and I had to say what my favourite song was I would immediately say this. I first heard this as a child and loved it even then, it’s kind of the perfect music to show a child honestly. Everything about this track is perfect, the arrangement, the lyrics are sweet and tender without seeming obvious. Literally, everything begins with this song.

Shut The Door – Fugazi
Fugazi are probably the most important band in my life, they shaped how I listened to music the minute that I heard this album and dictated how I would write music in the future. This song is a personal favourite but in all honesty, you could pick any track off of Repeater and have a great time.

Nighttime/Anytime (It’s Alright) – Constantines
Before Mob Wife, I was working a crappy desk job and didn’t really have any inspiration to do anything, especially not music. I heard this song and it kicked me right in the teeth and immediately made me want to write again. Constantines are one of these forgotten bands from around the time Interpol & The Strokes were becoming massive but this album holds up against some of the best of that time.

Baby Boy – Pile
Pile were another band that really kicked me into writing heavier music. I had to pick one song of this album but their entire output is annoyingly perfect. Honestly the most original and interesting band going at the moment and a big influence on us.

Dress Rehearsal Rag – Leonard Cohen
My parents made me listen to Leonard Cohen pretty much all the time from a young age, at the time I thought it was just my parents’ boring music but I’ve since come to appreciate it. My mum is a poet so she listened to him for the way he writes and I’m the same now.

Acetate – Metz
Not exactly a shocking one here. Metz are the band that we get compared to the most and for good reason because we listen to a lot of Metz because Metz are amazing. End of.

The Dazzler – Ex:Re
This is actually something we’ve recently come to love, it’s the solo project of Daughter’s Elena Tonra. I think it’s very important in music to be really raw and bare in whatever you can, whether it be in your production or in your playing, this is a masterclass in how to bare your emotions and soul onto a record with complete conviction.

Luau – Drive Like Jehu
Drive Like Jehu came along shortly after I fell for Fugazi, the experimentation in structure and timing is just unbelievable. It’s important for bands to not just follow a strict structure in their songs, originality comes in many forms and Drive Like Jehu showed us that messing with your songs in a big way can be one of them.

Going to Georgia – The Mountain Goats
John Darnielle is the greatest living lyricist and no song can encapsulate that better than ‘Going to Georgia’. In two verses and two choruses, he manages to tell a story of pain, love and mental health with ease and grace. Lyrics are obviously just as important as music and The Mountain Goats show that all you need sometimes is a great story to tell and four chords.