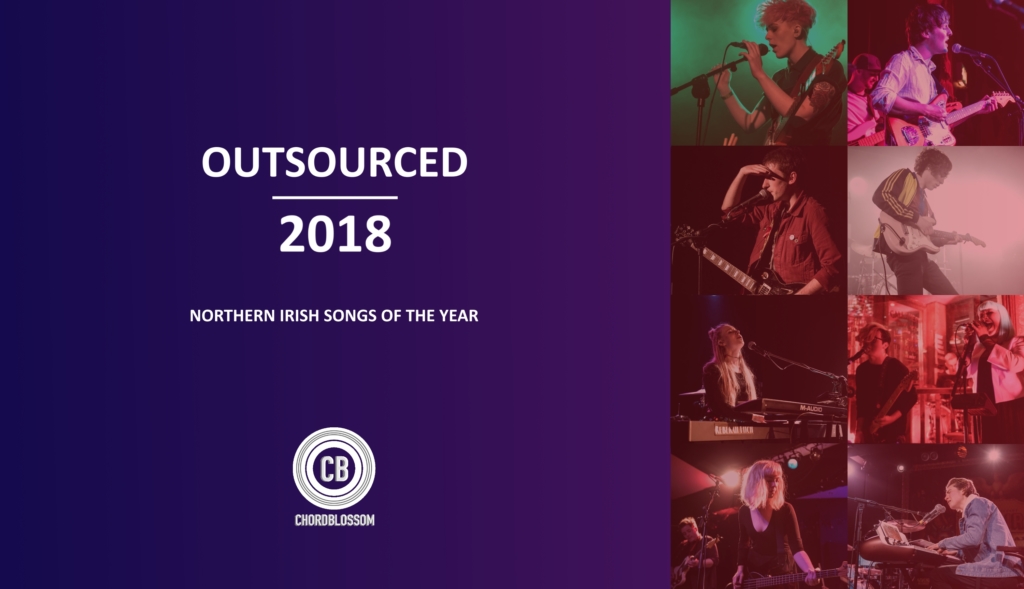 Whether you are a regular or a casual visitor to Chordblossom we hope our passion for local music comes across loud and clear. Thankfully it isn’t just us that are passionate about Northern Irish music, there are a wide variety of promoters, journalists, managers and other industry personnel keen to champion and promote it. As in previous years, we have done some outsourcing, and canvased the views of a wide range of these individual professionals for their favourite songs released in 2018.

SOAK – Everybody Loves You

“It’s been a brilliant year for stand out singles and I have wrestled with my decision on several. Sneaky shout out to Sea Pinks with Run & Run, but I’m going to go with SOAK and ‘Everybody Loves You’. It’s an absolutely beautiful song, a dreamy journey and I adore the almost choral lift near the end that just swells the heart. There is an added depth and richness to the new sound and I think it marks the return of a more open and mature songwriter in Bridie Monds-Watson. I’m really looking forward to the follow up album now.”

Cherym – Take It Back

“It’s always incredibly tough to single out just one band for lists like this, particularly when we have had another great year of music in NI. Acts like The Woodburning Savages, Kitt Philippa, ASIWYFA, Rosborough, The Bonnevilles and Roe were all in the mix for me, but this year I think my favourite single was ‘Take it Back’ by Cherym.

I went to watch a live recording of an ATL special that went out around the time the BBC biggest weekend was happening and Cherym played alongside some awesome acts like ASIWYFA, Joshua Burnside and Kitt Philippa and they absolutely killed it, with ‘Take it back’ being a standout track in a set that saw them seize their moment and really shine in the midst of some more established contemporaries.

The track takes me back in time to when I was a huge Green Day fan in the 90’s, it’s something that could have been on Dookie and wouldn’t have been out of place. Simple, energetic, effective and infectious. Good fucking stuff.”

“This is such a catchy song and pretty much right up my street. On a more bias note (highlighting the bands the members have previously been/are in), I’ve always been a fan of Fighting With Wire and Girls Names and having gigged with The Rupture Dogs and Cruising! Many of their influences (including Sonic Youth and Team Dresch) are big inspirations for Sister Ghost too, so anything this band release is always going to be stuck in my head & hold a place in my heart.”

Runabay – Blink of an Eye

“For us at Moira Calling our favourite Northern Irish Track for 2018 was ‘Blink of an Eye’ by Runabay. Traditionally described as performing Alt Folk or Classic Rock this brilliantly written track is a move away from this genre with a lot of strings, drums and percussion from the off with of course the haunting vocals of John McManus throughout. They were awesome live when they played this track at Moira Calling this year and we are excited to see what else is to come from them in 2019!”

“2018 was the year that Brand New Friend delivered upon the early promise that catapulted them to a record deal with Frank Turner’s label, and it was “Girl” that showed us just what they could do. “Girl” is is the kind of song that gets straight to the point, without any fat whatsoever on it. In less than two minutes, we get two verses, two choruses, a guitar solo, and then both the verse and chorus simultaneously. It is an infectious slice of youthful pop-punk that never outstays its welcome, and still leaves you craving more.”

“As 2019 dawns and the dust settles on a year that saw the new frontline of NI music change and evolve more than ever, we are catching our breath and assessing the damage. Not too many bruises, a few scuffs maybe and one brand new true love. The Goddamn Wood Burning Savages.

The stand out single ‘I Don’t Know Why I Do It To Myself’ is full of catchy hooks, clever lyrics and undeniable quality song writing. It is an experience, classic but not dated, fresh but not forgettable. A call back to everything you remember loving about rock music but seldom find any more.”

Ex-Isles – Run to the Porcelain Hills

“I have Moving on Music to thank for my introduction to Ex-Isles. They were described to me as being similar to John Grant, Scott Walker, David Sylvian and ANOHNI – for my personal taste in music this was the most exciting combination. As soon as I left the office that day I listened to their debut album for the first time and I was overwhelmed with joy – from an early age I have been obsessed with the band Japan and I never thought I would hear their likeness come out of NI.

If you are a fan of beautiful, apocalyptic music with rich vocal arrangements and a theatricality to the delivery that you just don’t hear these days, then please check out Ex-Isles.

If you are not, then never talk to me again”

“Bicep are two very exciting young and emerging electronic producers and DJs from Belfast who wrote a great tune, Opal, which was originally released in 2017 and then remixed in 2018 by a highly respected and established electronic artist, Kieran Hebden, aka Four Tet. It is a winning combination!”

SOAK – Everybody Loves You

“Soak’s return was one of my most impatiently anticipated of 2018. Well worth the wait, ‘Everybody Loves You’ channels the vulnerability that’s infused the Derry musician’s releases since she washed over the NI music scene as a shockingly young (and infuriatingly talented) teenager.

The slight departure from her acoustic soundscape does a lot to showcase the emotional maturity packed into her lyrics. Easily played on loop, the track sees Soak circling from self-denial to confession: “Everybody loves you / and I do, too.” The universally hard-hitting story of pride and heartbreak has been told before, but rarely as beautifully.”