KTG and the Cosmos – Bones 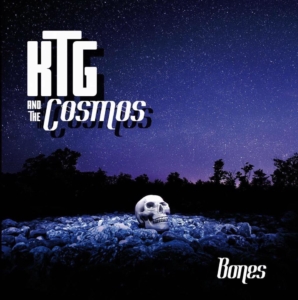 Local hell-raisers Conjuring Fate have been delighting local rockers since their formation around a decade ago with their raucous live shows and classic metal tunes. The band are currently locked in the studio recording so CF shows have been rather scarce of late. While this has been going on, guitarist Karl Gibson has taken it upon himself to keep his creative juices flowing with his solo project KTG and the Cosmos. Springing into life just a few short months ago, the guitarist has already recorded debut album Bones, due for release imminently, as well as put out a video for lead single ‘You and Me’ – a busy beaver is young Mr. Gibson!

Album opener ‘Black Sheep’ does more than just set the tone for the listener; it also knocks any preconceived ideas of the album’s sound smartly off their perch. For this is an acoustic rock album, all jangly guitars, simple melodies and Gibson’s heartfelt and pleasingly raspy vocals. The word that springs to mind as one makes their way through the songs is ‘gentle’, or maybe ‘mellow’.

There’s also a rather indie, almost shoegaze-y sound to many of the tracks, giving them a sort of dreamy, fuzzy ambience reminiscent of many Nineties bands that enjoyed heavy radio rotation, such as Jesus and Mary Chain and The Verve.

Gibson is clearly a talented musician, and a prolific one at that, and his joy of playing different styles is clearly audible throughout, from almost flamenco in ‘Manners’ to classical in ‘Glory’ and ‘Thank You’. There’s even traces of jazz (‘World War Free’), indie pop (first single ‘You and Me’) and even country in the twangy ‘The Passing’.

For this reviewer, however, the highlight is the restrained and delicately emotional ‘Sing a Song For Me’, which bookends its tale of depression and loss with haunting wave sounds and really does tug at the heartstrings throughout. At the other end of the scale, but no less enjoyable, is ‘Healing’: with it’s rocking yet floaty feel and classy guitar solo it’s certainly unique, rather like a combination of Dire Straits and Eighties fuzz pop band The Church.

Bones is in some ways the polar opposite of Gibson’s other band Conjuring Fate. Whereas the latter are loud, brash and made for getting the blood pumping on a Saturday night, KTG and the Cosmos have more of a ‘headphones on, feet up, Sunday morning’ vibe. It’s technically superb, very easy to listen to and is really quite lovely, particularly the ‘leaves’ metaphor in ‘You and Me’. If you’re looking for an album of grown up acoustic rock that will chill you out and delight you in equal measure, this is the one for you.

Watch: PORTS – The Devil is a Songbird

Stream: Brash Isaac – In The Dark