2015 was an extremely busy year for Chordblossom as we worked even harder to promote musicians from Northern Ireland. 2016 is barely a few weeks old but we are keen to keep that momentum going and continue to give local musicians a platform to reach a wider audience. With that in mind, we are pleased to say that our annual Kickstart competition is open again. Previous winners include SOAK, Lauren Bird, Those Ghosts and In An Instant, so you will be in excellent company should you take the prize in 2016!

Kickstart is open to any musicians or bands from Northern Ireland interested in pushing themselves and their careers forward in 2016. All genres and ages are welcome, the only restrictions are that you are originally from NI and that you haven’t released a full length album.

Once all the entries are received, the Chordblossom team will decide who on an initial shortlist. These shortlisted acts will be subject to scrutiny from a collection of local music industry experts to decide the final four musicians in contention. These final four acts will perform at a showcase gig on Thursday 10th March 2016 in The Eglantine Bar, in association with Shizznigh Promotions, after which the organisations who are donating prizes will decide the winner of Kickstart 2016!

► Festival Slot – Courtesy of Stendhal Festival of Art
Limavady’s Stendhal Festival of Art continues to win plaudits for being the best summer festival on Northern Irish shores. Renowned for bringing in established artists like Turin Brakes, Frightened Rabbit, The Undertones along with the cream of Northern Irish music, you will have the privilege of joining the bill in 2016 .

► CD Duplication – Courtesy of Botanic Media
Your single has been recorded but you fancy having a few physical copies to distribute to blogs, radio and of course the punters at your next show. Botanic Media will provide you with 50 copies of your new single for you to distribute how you see fit. Previous clients include LORIS, Ben Glover and The Bonnevilles.

► Single Artwork – Courtesy of This Is Work
Your single is recorded, the video is good to go but there is one more thing you need before revealing it to the world: artwork. Alexander McCooke of This Is Work has kindly agreed to design your single sleeve. Current clients include Clockwork Orange, the Ulster Festival and Slemish Market Gardens.

► Single Launch Gig in Belfast – Courtesy of Chordblossom
Not only are we offering you all these wonderful prizes but we will also host your illustrious single launch. Over the past 18 months we hosted shows with the Wood Burning Savages, LORIS, Silences, R51 and more.

► Single Stocked in Shop & In-store performance – Courtesy of Head Belfast
Your newly recorded single will be stocked in the Northern Irish music section of the Head store in Castle Court and you will also be invited to perform in-store to promote it. 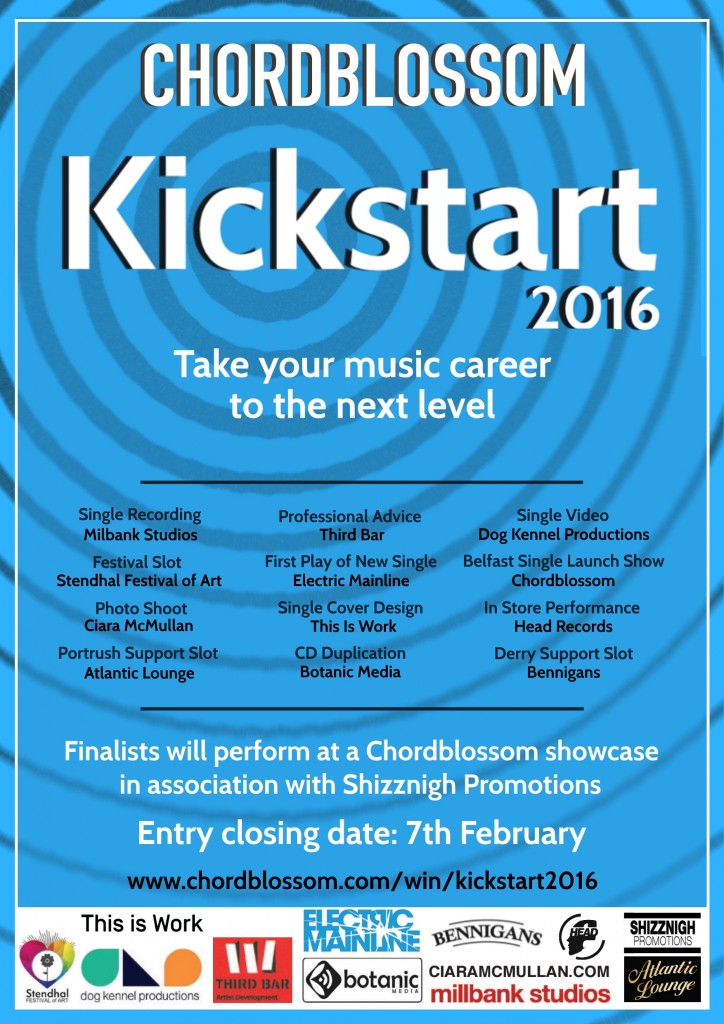